Here is an example on the sort of reviews you can expect from Quirky Races. This is taken from the blog of our head man Chris (https://chrislambracingdiary.wordpress.com/)

Another day, another crazy race.

It doesn’t take much of a look through my blog to see I like to do some crazy races and I’d have to put this one up there with the best of them.

I’m no stranger to carrying things while running these days weather that’s a sandbag, a tyre or a sack of potatoes but this time there was a lot more on the line. I was carrying an actual living, breathing, moving person and not any old person either. It was my wife. 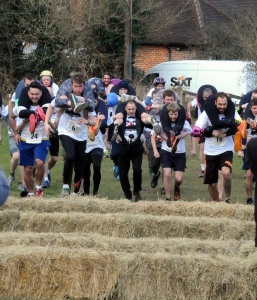 Now many would be forgiven for thinking this would mean I’d have to slow things down a little or be a bit less competitive but those that know me better will be well aware that with a national title at stake that wasn’t going to happen.

It sounds like a bit of fun and don’t get me wrong it most certainly was but at the same time it was also very serious which is just the way I like it. There were strict rules of minimum wife weights (50kg) with a weigh in at registration, a health and safety warning which came with the risk of possible death & a helmet a compulsory measure for all those being carried.

This was the ninth edition of this annual race held in Dorking, Surrey and during that time many different carrying positions have been adopted with the Estonian hold being the most popular and effective so therefore the one we were going for. 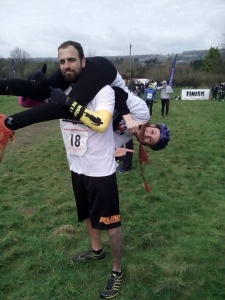 In the weeks leading up to the event we got out a few times to have a little practice but it was only on the Friday beforehand that we got our first and only substantial session in but we felt this, along with my carrying/ running experience, was enough to challenge amongst the first few places and with the distance being a fairly short 380m we could run anyone pretty close. 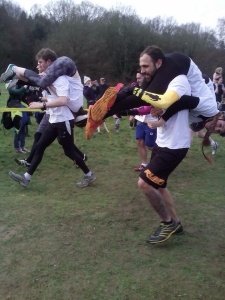 The course began with some hay bales to step over followed by a steepening hill to run up before turning and following the the same path back down this time including a splash zone where waiting volunteers would throw water at you from large orange buckets before going back over the hay bales to finish.

After a rather amusing race briefing, the race began. We were in the front row as I knew we needed a good start before carefully negotiating the hay bales. As I set off up the hill only three other couples were in front of us, two of whom I caught before reaching the top. 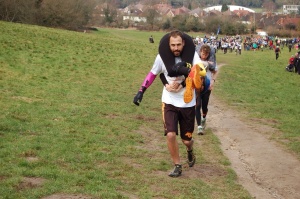 The leading couple, who were the raining champions, had gained a good lead. I pushed as hard as I could but there is a limit to how fast you can go when running down hill on uneven ground, carrying your wife upside down on your back while staying upright and although we made up some ground the lead turned out to be insurmountable.

We got to the splash zone well clear of third place knowing I just needed to get back over the hay bales and we would be home but certainly not dry. I got a bucket full of freezing cold water straight in my face from point blank range which took my breath away and made the remainder of the race a bit of a blur. I managed not to fall over though, my wife had survived the ordeal and we had finished in second place. 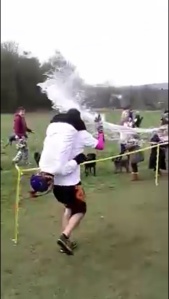 With a time of 1 minute 45 seconds, around 5 seconds behind the winners, we had also beaten the previous course record by a good margin. We collected a medal each and a 5 litre barrel of wife carrying ale feeling satisfied with a good first attempt at this unique race, especially having done so little preparation. We hope to return next year for the laughs and a stronger challenge at the title. 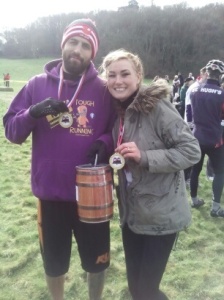