It’s difficult to put into words what this event is all about, and I warn you that if you are considering doing it you should carry on reading this with a clear mind-set that this is a very subjective and generalised overview of what happened this year from the viewpoint of #129, rather than a reflection on what you can expect should you decide to give it a go.

The Unknown, I feel, is better appreciated by knowing as little as possible beforehand. Fully immerse yourself in the experience, release any premonitions or preconceptions and dismiss everything you’ve read or heard about it as urban myth, including what you are about to read.

All we really knew was that we would be getting at least 36 hours of relentless physical and mental challenges to try to break us down. If you gave up at any point you were out, if you made it to the end (whenever that may be) you had survived the Unknown and would receive the medal.

The hook of this event is that it will be for you what YOU make of it.
The name is a big clue on what to expect. In the lead up to the event all we received were three emails within a month or so of each other from the Judgement Day team with equipment that would be needed. The final email gave the location and arrival time. All very cryptic, our kit list included, amongst others: shovel, builders bucket, 100 pennies and a specific Lego set.

On the day, I set off with 8 fellow Parklands Tough Running members, to what would turn out to be the most challenging events I have ever participated in. 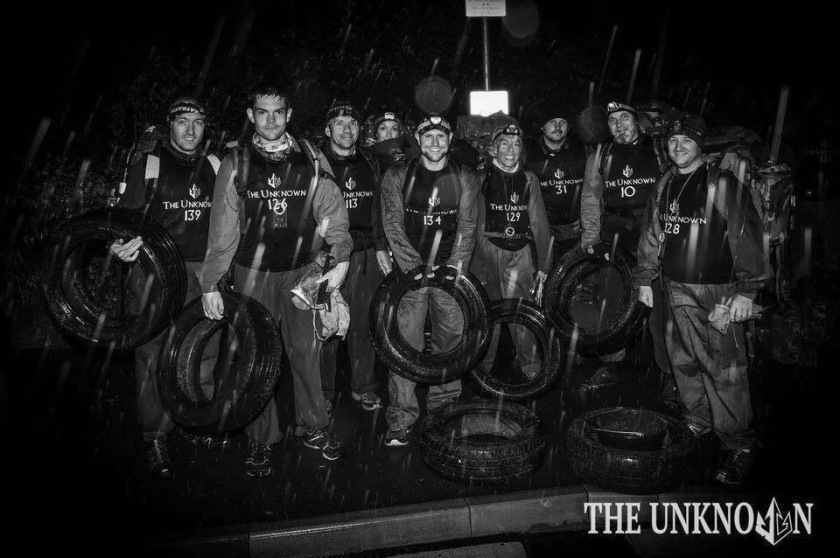 On arrival the organisers gave all 42 participants a vest with our number – this became our name, and they became “Staff”. We were instructed to put our overalls on, get our compass and a hessian sandbag at the ready and line up with our equipment on the curve of a Park and Ride car park in Anglesea, North Wales. We all put a empty sandbag on the head of a fellow number, and lay on our bellies, on the wet ground in stress position (hands on head). Sensory deprivation meant every sound and movement was amplified. We spent some time there, hearing cars come and go, some giggling, some very quiet. Eventually we were ushered onto coaches, with sandbags still on our heads. Sitting in the brace position through the coach journey we were taken to the this year’s location.

Once off the coaches we were sat on the ground in three groups. After removing sandbags from our heads we were reunited with our bergens (military rucksacks), tyres, and issued with a map.

The first task was navigating to a given checkpoint using a 6 digit grid reference. The task was difficult and the only way we could be successful was to work as a team (and to be able to read a map!) Team dynamics played out, and off we went around in circles, until eventually my team found check-point 1 which gave us the confidence to find checkpoint 2. However the navigational skills of the whole group were not up to scratch and the first exercise was taking too long so all three groups were ordered back to base camp for what would be the official start of The Unknown.

At basecamp we were issued with three wrist bands: black, red and white. Not completing certain tasks would lose you a band in order of importance-first black, then red and finally white. Losing all three bands would mean not completing The Unknown. This was the first time I realised that it would take a little more than just plodding along to make it through the weekend.

Due to our poor performance in the initial navigation task we were all stripped of the black band, made to snap them to make the point very clear – “Toto, we’re not in Kansas anymore”.

It’s difficult to remember every exact tasks and exercises that we carried out over the weekend but they all involved some sort of carrying of loads, running, crawling, team work or individual work – all in and out of the water. There are a few that stick out so I will focus on those.

Navigation and memory test: It was clear from the offset that only a few of us could navigate using the map we were given so the memory task, which involved navigation, was not going to be an easy one. We were tasked with visiting 4 check points within a 2 hour timeframe. At each checkpoint we were presented with images, three playing cards, to memorise. We then had to return to basecamp to recite the cards in order. We were to do this task without conferring, without even talking to each other.

Pencil Rolls: These were actually called Sausage Rolls, but I am way too fond of sausage rolls for that. The task seems fairly simple: you roll along a distance, then you get up and do 5 burpees, then you crawl up and over a little sand dune, do another 5 burpees, then roll some more, and finish off by crawling to the beginning where you are asked a question and given water. The brutal part of this exercise was the rolling, which was over a distance of around 20 meters both times. Dizziness and nausea kicks in. The leopard crawls add to the difficulty as you have to keep your belly to the ground. This had to be repeated 4 times and most people found this one of their lowest points in the event.

Equipment carry: At basecamp there was an array of equipment in the main circle, and on Saturday we set out to carry the equipment to two checkpoints. The emphasis being in team work, we had to move stretchers, ammunition boxes, heavy bergens and tyres to checkpoint 3 in the dunes. We left some of the equipment there and the rest was taken to checkpoint 2. At the time we did not know that the equipment would need to be retrieved and brought back to camp by the remaining participants as one of the last tasks on Sunday.

Tyres on the beach: We carried out a series of exercises on the beach with tyres. An individual exercise involving pushing our tyres along the beach and then sprinting to the start point with the tyre held high over our heads. There was also a team exercise involving a tractor tyre, rope and the smaller tyres. It involved dragging the tractor tyre along the beach, adding a smaller tyre on each lap at one end, and doing a burpee per smaller tyre at the other end of the distance. 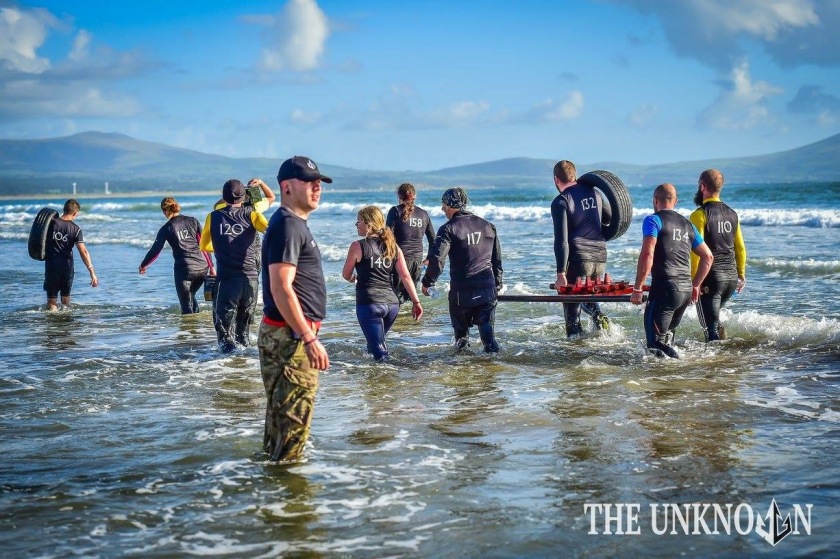 Escape and Evade: We would be guided to a checkpoint and split in groups of three. The task was easy: make your way back to camp as a team without getting caught, or face the consequences of capture. We had to carry our fully packed Bergen for this exercise and we had 2 hours to compete it. Our watches had been confiscated at the beginning, were given them back to keep track of time as one way or the other all participants were expected back at camp for 11:30am. I think the key to this one was stealth and team work. Whilst several numbers made it back to camp avoiding capture, the majority were caught, myself included. The consequence? A relentless beasting which involved crawls, tyre carries, lung walking, squats, press ups and so on. I felt it was one of the most gruelling beastings of the entire event.

Sandbag Tabs: In the very early hours of Sunday morning we were tasked with collecting a sand bag from the circle to take on a tab, in formation of 3. The tab was to be carried out in silence and we were informed by Staff that we were not to talk to each other, hum, sing or make any noises. At a half-way point we put our sandbags down and picked up a different one. It was dark and we had only slept for around 90 minutes. At this stage, so close to the end, we were still losing numbers. But the end was final in sight.

Penny hill: We were lead to the sand dunes on the beach front with our 100 pennies each for this task. The remaining numbers, 25 of us at that point, were asked to empty our pennies into a bucket which was placed at the bottom left-hand side of a tall sand dune. The task was simple: take 2 pennies, walk up the sand dune to deposit one penny in another bucket at the top, then go down the other side of the sand dune to deposit the other penny in a bucket at the bottom right-hand side. Repeat until all pennies have been transferred to the other buckets – that’s 2500 pennies in total. The reward for completing the task? Full submersion in the sea and a run back to basecamp for the next exercise. 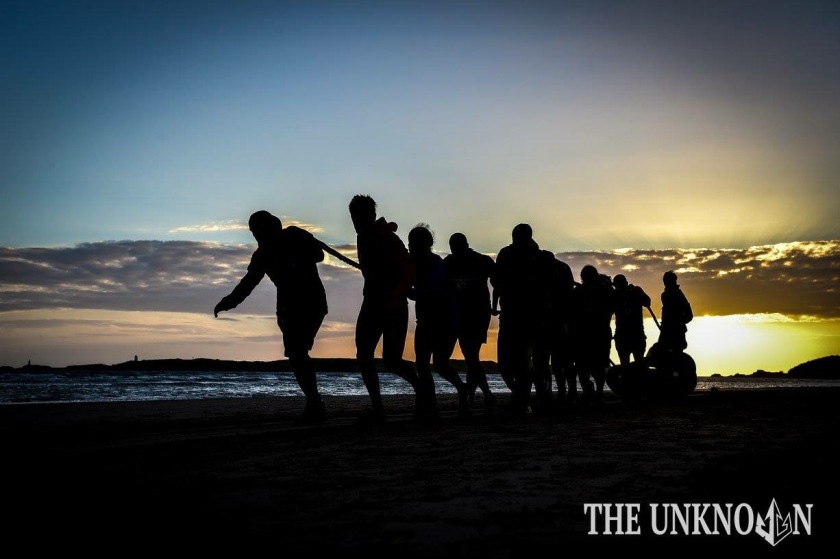 The final task was, for me, a reflection of what my Unknown experience had been all about. We were all broken, some of my team mates had been pulled out due to injury and those of us that remained were hungry, tired, emotional and cold. Only 25 of the total participants remained. This task involved a run from base camp to a flag on the beach, then into the sea for exercises in increments of 3: 3 second full submersion and 3 burpees. After each set of exercised, return to basecamp, and then go back out to the next flag, adding 3 more to each exercise. There were 5 flags to reach.

I have no idea what distance I covered, how much weight I carried, or how many hours I was awake and working. That is not what The Unknown is about. It is about the intangible things – knowing what you can do, and then pushing further. It’s about finding your limits and challenging them. It’s about being the best that you can be, and helping others to reach that same place. A brilliant event, challenging and rewarding in equal measure. And when you know, you know!

The documentary below from Mudstacle elaborates on Natasha’s words.