Arriving at London’s Kempton Park Racecourse it was clear to see that the inflatable obstacles weren’t the only thing UK Running Events had gone big on. This was an impressive venue and set up. From their social media communications I knew the inflatables were going to be large but the shear size of them up close surprised me. This was going to be a fun race! 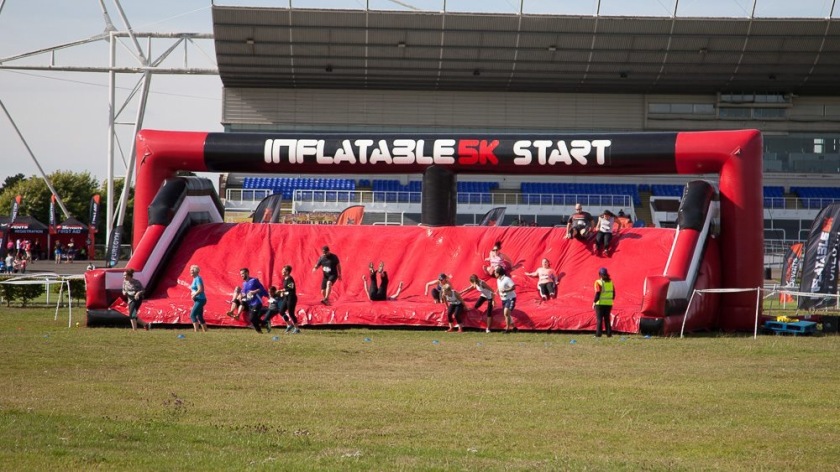 I have to say that I was also surprised by the lack of people present. But having already done the Kettering parkrun and travelling over 80 miles from Northampton we didn’t get there until 1.30pm and the event had been going since 9am. I was told it had been a lot busier early on and after setting off in the 2pm wave I soon became grateful of the lack of numbers as the marshals, who I must say we’re fabulous all the way around the route, we’re keeping it to a few people at a time on each obstacle. My first thoughts were that this must have caused some big queuing early on but from gathering various bits of feedback I’ve only seen positive comments. This explains why they had spread the waves out over a 6 hour period and it all seemed to be managed really well.

To be honest though, nobody seemed to be in a rush anyway. The majority of people were walking between obstacles. No timing or results published here. This event was all about enjoying the inflatables and having a good time.

I thought the 10 obstacles were spaced out really well around the 5k course which broke up each running sections nicely. From first viewing it looked like the entire route was going to be on the grass infield of the horse racing track so it was refreshing when we moved into a section of woodland around a lake and the terrain varied to pavement, trail, gravel track and back to grass.

Most of the inflatables were a take on the standard things you’d expect from the now hugely popular obstacle course races such as climbing walls, tunnels, hurdles and slides but they felt safer and more enjoyable by the fact they were all soft and bouncy. 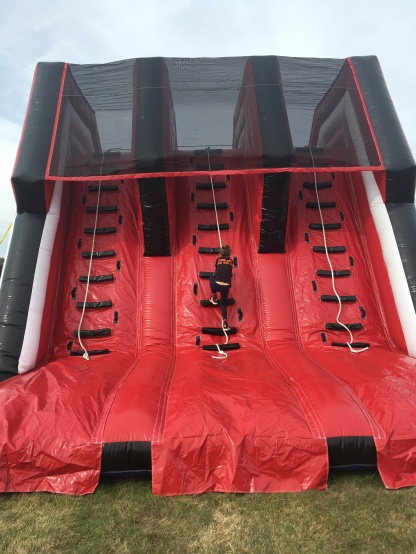 This event is perfect to fun runners, first time racers, those who have always fancied an obstacle course race but are put off by getting wet and muddy and anyone who just wants to have a good laugh while being active at the same time. It’s also a really good one to do with children. I ran round with my 7 year old daughter and she loved it.

This was the company’s inaugural event and if it’s anything to go by their Halloween, Zombie and Christmas themed events later this year are going to be well worth checking out.