The website description of ‘A 6 Km easy trail run/walk with feed stations every 2 kilometres, stocked with Pies’ didn’t turnout to be entirely true but for several reasons that wasn’t necessarily a bad thing as our guest reviewer Alan found out.

It was Saturday night and I was preparing for Team OA’s annual Pieathlon the following day. 2 porkpies, 6 mince pies and a steak bake down the hatch I decide to call it a day, this last min preparation never works anyway. At least I knew my running was going to be up to it having run every day in December as part of #teambabycham challenge.

Arriving at the venue just outside Huddersfield, which I must say was pretty easy to find, the designated car park was already full so I had to pop around to the second car park, but this was only 2 mins away so not a problem.

The quick and easy registration was in a school sports hall which was toasty and warm, unlike the temperature outside of 5 degrees with a chilling wind meaning nobody wanted to leave until the last minute. Especially me as I was bare chested dressed in my Spartan costume. With seconds to spare before the start I picked up my shield and made a dash for it, joining the rest of the runners in more traditional Christmas dress of Santa and elf suits.

As we set off we made our way across the school playing fields where a local football match that was taking place and they seem to stop as 300 or so crazy people in fancy dress made their way passed.

Out of the field and onto the roads, we were almost at the first kilometre as we ran up a gentle incline before dropping down a short hill to the first pie station. Pork pie was on the menu, I ate mine steadily before setting off again.

This was the start of the off road section, first down a farm track before ascending up hill through some woods, across a golf course and then continuing through more woods till we reached the summit. We were met with some great views (check out the video below). What goes up must come down so the traverse down the hill side followed. The sticky muddy paths that were worn down and churned up by sheep, gave me an opportunity to overtake people (that’s not usually my style) thanks to my my footwear choice of my Icebugs.

After climbing over a few styles the descent increased in a variety of terrains before reaching the ‘bog of DOOOOOOM’. Well actually it was just a bog, but non the less it was a good 12 inch deep and very smelly!

Out of the bog and pie station number 2 was serving up mince pies. Licking the last of the sugar off my lips I set off again, ‘5km down and 1 to go’ I thought to myself. Oh how wrong was I?

Almost 7km with 250m of elevation (seemed more) and this Spartan had finished receiving a top class t-shirt for my efforts.

The pieathlon is a great event, personally I would have preferred more off road running but that’s just my preference. The mark of a good event is returning and yes I will be going back for more pies (and more hills) next year. I am also going to try their beerathlon and wineathlon which Quirky Races also plan to cover.

Held annually in the small Northamptonshire village of Nether Heyford this Christmas run has all the ingredients we love here at Quirky Races. It’s different, it involves fancy dress, it’s great fun but can also be taken seriously, there’s something for the kids and there’s a twist that makes it that little bit more unique.

After a well organised registration in the village hall we headed outside where the half mile and 1 mile fun run for kids and adults on the village green was taking place with a brass band playing Christmas carols adding to the friendly and festive atmosphere.

It was then time for the main even, the 5 mile run. Almost everyone was dressed to impress with full Santa suits on. The twist came in the challenge of a £100 prize up for grabs for anyone who could beat the Christmas pudding. This involved a runner who is normally dressed as a pudding (but we were told he’d lost his suit so it was slightly disappointing to see him in just a hi-vis vest) being set off early with the task of not letting any of the Santas catch him.

The course, all of country roads and paths, was very tough and hilly. Having faced the various inclines on the way out there was a great stretch round the village of Flore which I really enjoyed before facing the hills again as the route doubled back in to Nether Heyford. 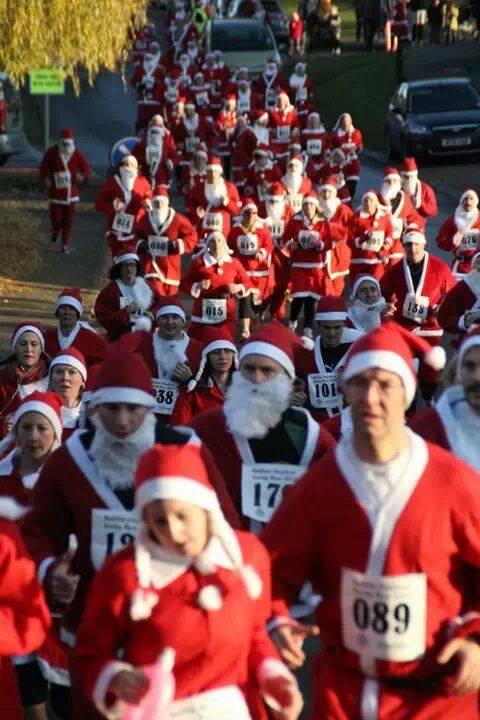 The race finished back on the village green where you were presented with a medal, drinks & sweets. It was a hard course made even more difficult by the Santa suit, partially the beard, on what was an uncharacteristically sunny December day. This certainly didn’t reduce the fun factor for me though as I really enjoyed the run and although I didn’t catch the pudding I did managed to knock a few minutes off my previous 5 mile PB.

There’s a really nice vibe to this event and you can tell it’s been going for several years as it’s very well ran. Certainly one for the calendar to get you in the Christmas spirit.

This was the second running of this annual November event held by Race Harborough in which participants run an out and back 5 mile route along the disused railway path of Brampton Valley Way. The event starts at 7.30 PM meaning it’s pitch black so all runners require a head torch to guide them. The only part of the course which is lit is the unique 200 meter long tunnel that runners pass through in both directions.

A nice and quirky touch to this race is that everyone is given a pair of glow in the dark glasses at the half way turn around point to prove they have completed the full distance. At the end, as well as a very welcomed cup of hot soup to warm the cockles on what was a chilly winter’s night, all finishers were awarded an engraved pint glass. 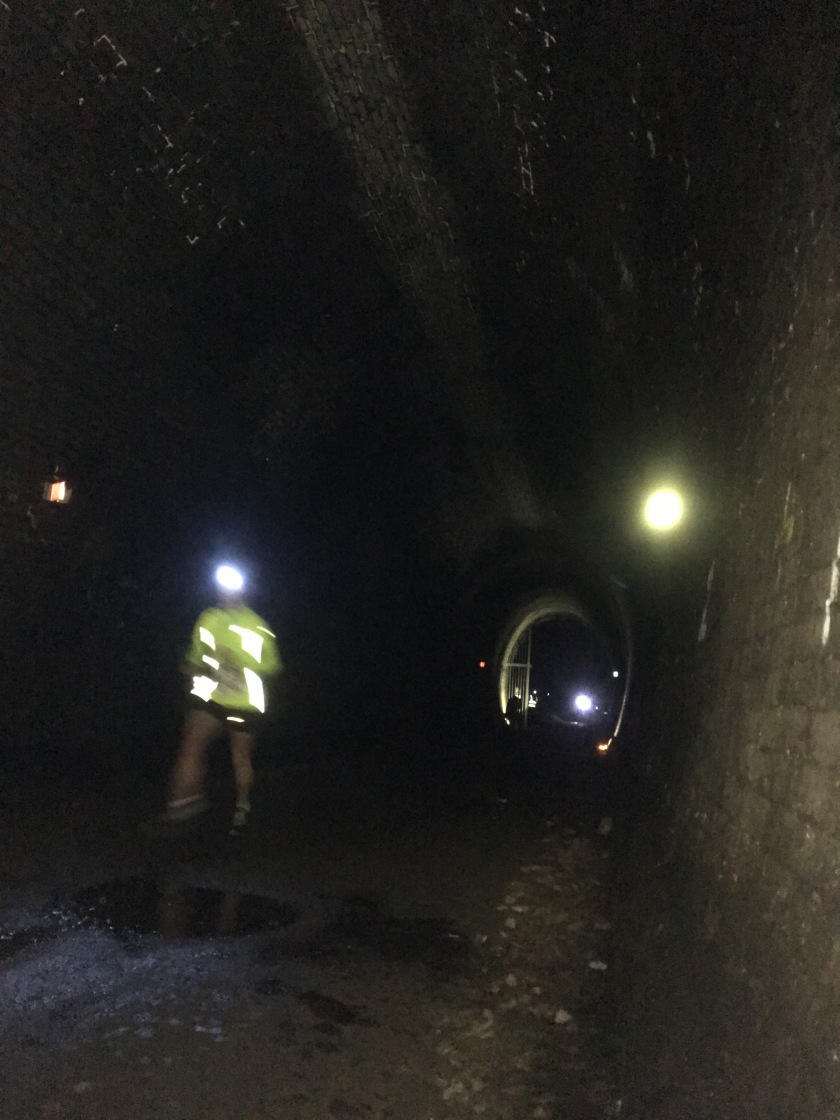 There is approximately 2 miles of running before reaching the tunnel in which around half was on a dry puddle free section before a wet and sludgy straight. The variation in terrain made the standard running more interesting and kept you on your toes. 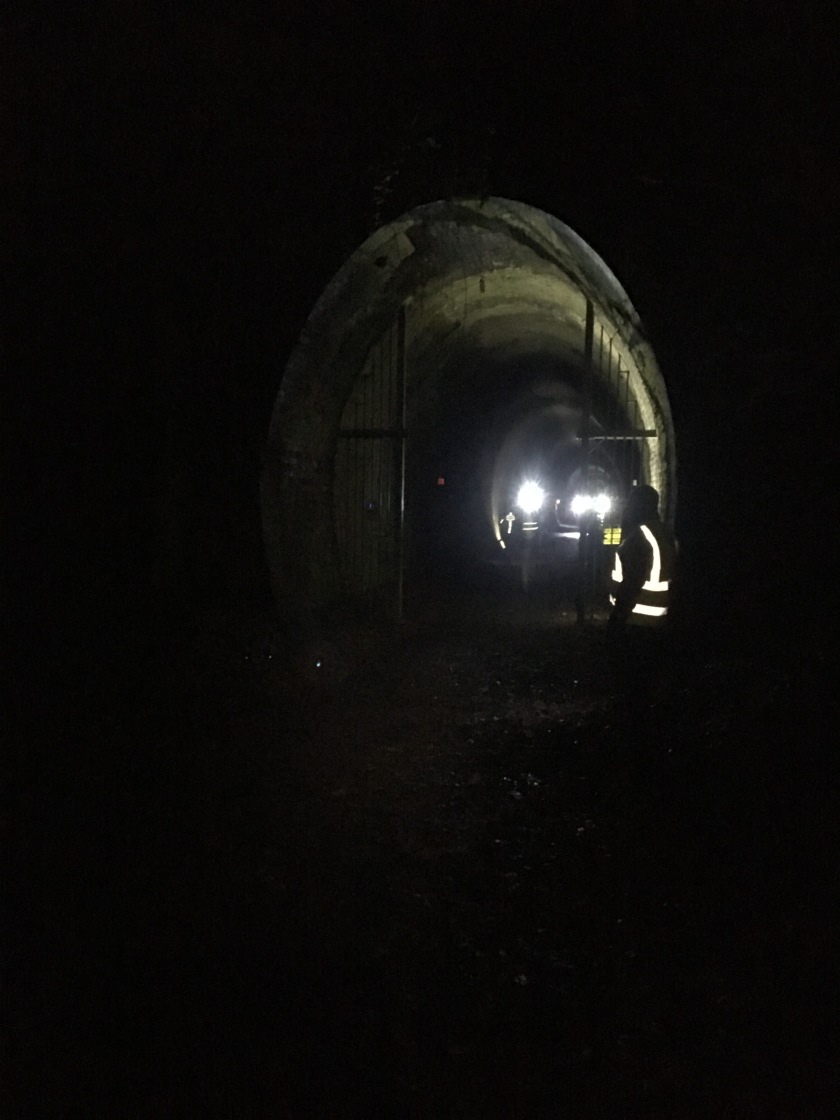 With the path being fairly narrow you had to stay vigilant and alert throughout the run back as people were going in both directions. Because of this I must admit I did find the decision to allow people to run with dogs a strange one. That is however one of the only negatives I can point out about this event. It’s really well ran, chipped timed and raises lots of funds for the Mo’Ket Harborough campaign which supports Movember raising awareness for men’s health.