The Good, the Bad and the Ugly.

When I saw the news of an upcoming race at a theme park, like many others, I was intrigued. I thought it sounded unmissable. Then maybe not like so many others I actually looked into it in more detail. I found the website to be clear in it’s information regarding the route and with that it didn’t take a genius to realise only the start and finish would be held at the actual park itself with the rest of the course on the surrounding county roads. 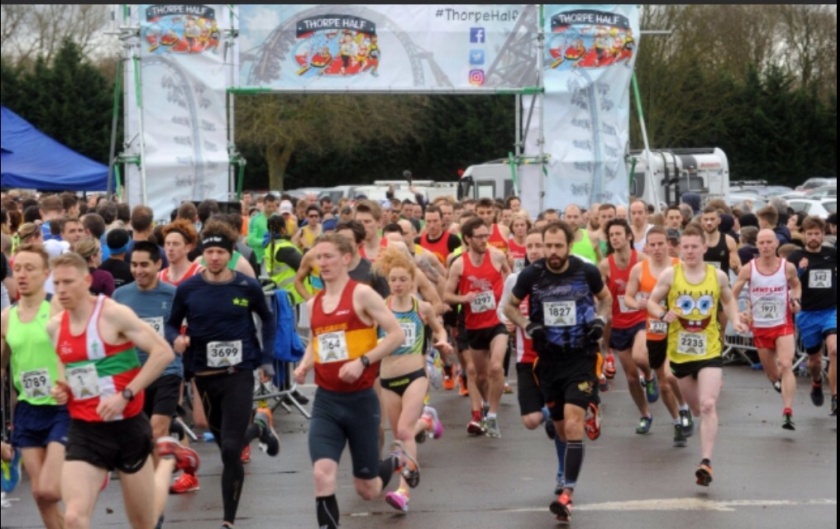 Having been to Thorpe Park on a number of occasions and therefore knowing the layout I wasn’t surprised to read that only the car park would be used but I did anticipated the title of the event would lead to lots of people expecting a lot more than they were likely to be getting. With that I’m not saying that I think the organisers were being misleading, I’ve just come to realise that not everyone bothers to take the time to read simple details in this day and age. The internet has lead to people becoming too comfortable with doing things the easy way and having everything laid out for them even when all they need to know is only a few clicks away.

In the run up to race day I monitored the event’s Facebook page and saw the inevitable complaints as people realised they wouldn’t actually be running past Saw the ride, Stealth or Nemesis Inferno. What they would be getting however was a pretty standard half marathon course with an event village, start and finish area that was a little bit different. With so much competition amongst event organisers and so many races to chose from now I see nothing wrong with these guys emphasising the fact that they had secured one of the countries top tourist attractions as their venue. Its not uncommon for an event to be held in the grounds of a stately home or a castle for example, but participants don’t turn up expecting to be running trough the building itself so I don’t see why this is any different. 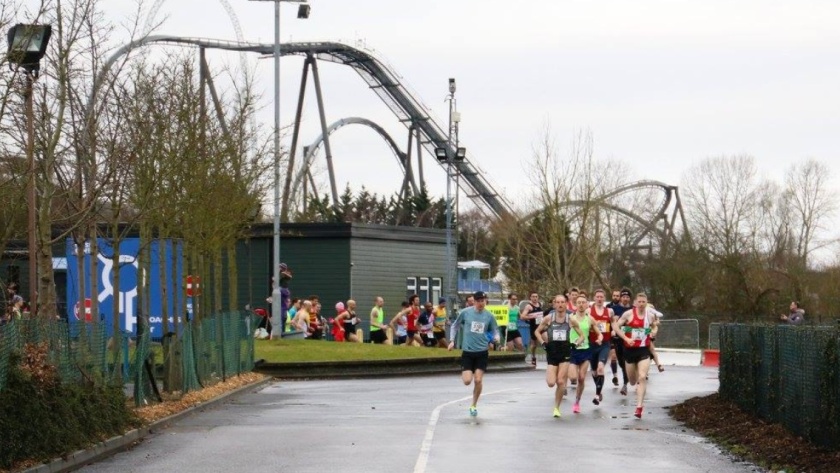 A few days beforehand I received my race number and timing chip through the post. This seems to be a dying process as organisers look to save money wherever they can but for me it’s a wise move. It gives racers one less thing to do on the day itself and avoids a queue for collection which only invites more reason for complaining and delays. This meant on arrive all I had to do was park up, warm up and get myself to the start line on time.

The pre event promotion had clearly worked as the race had attracted nearly 4,000 entries of all ability levels from those taking on their first ever 13.2 miles to GB Olympians. As we got underway so far an impression of a well organised, smoothly ran event had been given but would the course match that?

The route was very well spectated in the early parts but like many races that quietened down the further out we got but then build up again towards the end. This had a similar theme to the marshals as there seemed to be lots of them closer to the park but not perhaps as many as there could have been between miles 5-10. The course was well signed though and whenever we did pass marshals they were very cheerful and encouraging. There was also several photographers all providing free shots which went up quickly post race. 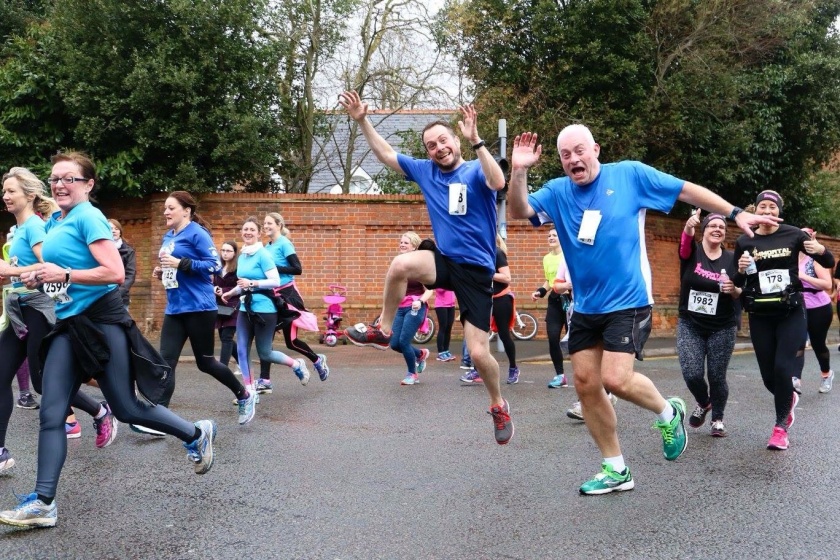 I would love to say that from here on in there were no issues but there are a couple of points that need addressing. Firstly, you should never have to read a sign saying ‘Nearly at the top’ in a race that describes itself as flat. This hill came at mile 4 and was a significant one. There were 3 others smaller, shorter ones along the route too. This wasn’t a major issue for me as I still found it to be quite a fast course on the whole but it would have been nicer to know what to expect when entering rather than being told something that wasn’t quite true.

The other matter however was more concerning. The entire route was supposed to be traffic free on closed roads. This unfortunately wasn’t the case. On two occasions the group of runners I was in came close to being hit be cars. The first time was early on in the race at a roundabout which I put down to them not realising the race had started and not expecting us to be there as soon as we were and therefore letting traffic through. What I will say is that a marshal on a bike did an excellent job of alerting the vehicle’s drivers of our presence by shouting at the top of his voice and diverting them away just in the nick of time avoiding incident.

The second time was at a cross roads approximately half way when the marshals didn’t seem to do such a good job of stopping a car that went straight across the route just as I passed prompting a scream from a runner just behind me. At certain places vehicles seemed to be heading towards us over overtaking on a regular basis leaving me unsure in what side if the road I should have been running on.

We asked the organisers to comment on this issue and they gave this response:

‘With regards to vehicles on the roads there were a few stray residents on the roads however next year we will inform our traffic management supplier (CPS) to increase the number of marshals on the route.’

Positives included a good selection of well stocked water stations, smooth roads and a good course layout. I liked that it was one large loop which came back on itself in the last couple of miles giving familiarity when it was needed most. I also liked the couple of small sections that doubled back on themselves meaning you could get a good look at who was in front of you and by how much. The first one of these which just a few miles to go really spurred me on to push harder. 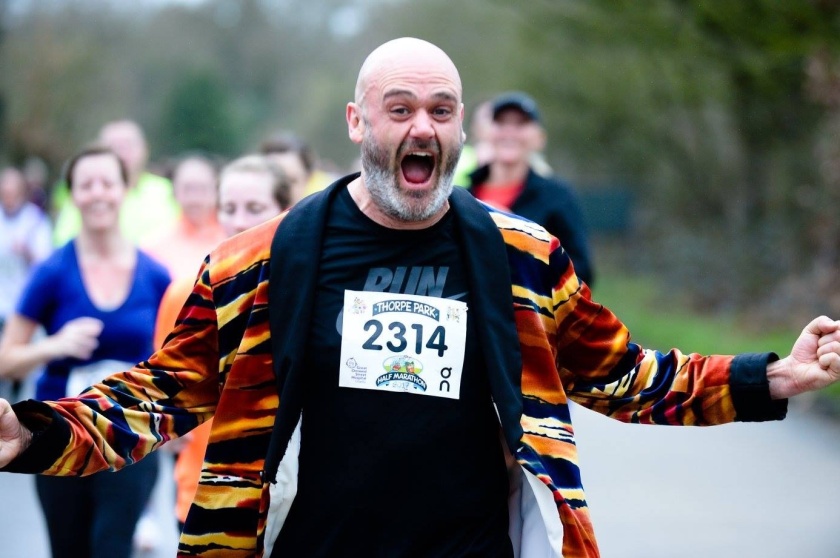 As you turned the final corner the last quarter of a mile was excellent. The view of the huge structures of the white knuckle rides, the music pumping and the MC calling out everyone’s name as they crossed the finish line gave that last bit of motivation needed for a final sprint.

With a medal hung around my neck and t-shirt collected along with a selection of other nutritional goodies it was a short walk back to the car to get changed and reflect on my performance.

As I took my well earned medal off for a closer look I noticed the bottom had been chipped off. I assumed it was a slightly damaged one but wasn’t bothered enough to go back and swap it. I put it in my bag and went back to the event village area to refuel on a delicious hog roast, watch the presentation and cheer in some of my fellow runners. There was a nice feel good atmosphere about the place and despite the cars on the course issue I was pleased I’d chosen to make the 3 hour round trip. 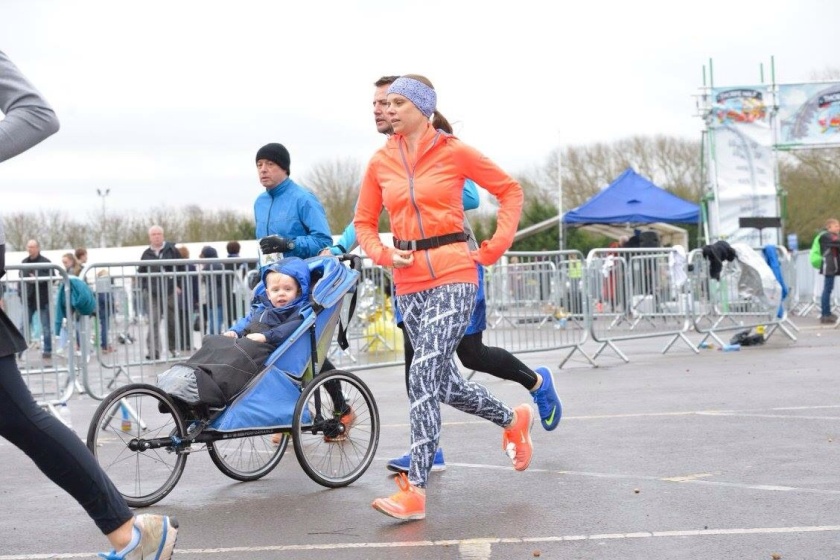 Leaving took some time and this was something many seemed to be rather aggrieved about. For me this is part and parcel of attending a large sporting event. If there are several thousand cars all leaving the same place at the same time with only one exit it’s inevitable queues will form. I don’t really know what those taking offence were expecting to be done about it. I don’t hear people complaining when attempting to get out of a football match or a gig so why should a running race be any different?

This would normally be where I do a short summery and end my review but on this occasion something else arose that seemed to overshadow the entire day for a large amount of participants. 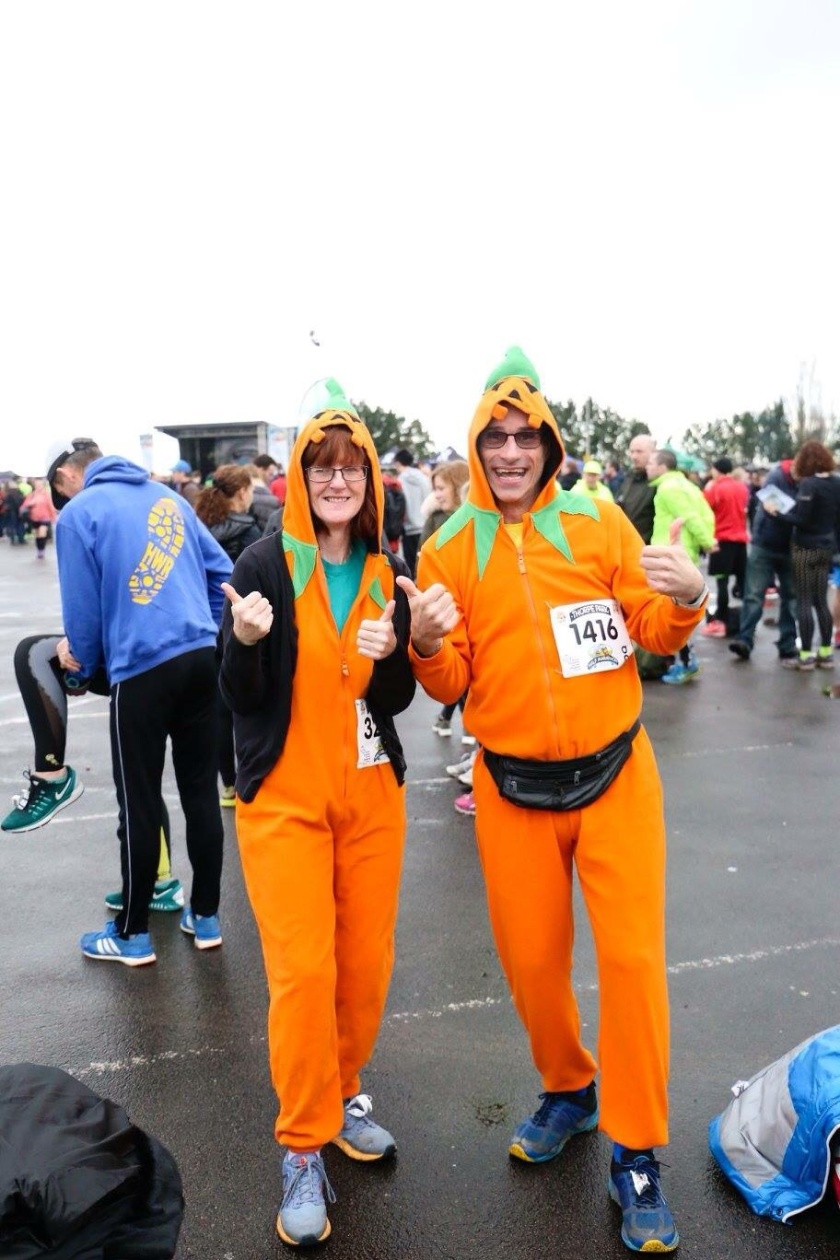 It turned out that my medal wasn’t the only one that was damaged, it was all of them and it had been done deliberately. The Thorpe Park logo had been filed off the bottom. We contacted the organisers who gave us this response:

‘Unfortunately there was a last minute unforeseen trademark issue which was outside of our control meaning that to bring you a medal for your hard work this was our only option so close to the event. We are very sorry about this and can assure you all issues will be ironed out for future race.’

In my personal opinion this was a slight annoyance but not something that would affect my day or my overall judgement of the event but unfortunately others, a whole lot of others, didn’t share my opinion and took to social media to vent their frustrations. I read comments from participants saying the main reason they’d entered was for the medal which turned out to look ‘a monstrosity’, it was badly adjusted looking ‘unprofessional’ and left sharp becoming ‘dangerous’. Although I feel those views are a little over the top and exaggerated I do agree with the vast majority who thought the most disappointed part was that the organisers didn’t come clear about this prior to the event. It was almost as though they hoped they were going to get away with it without enough people noticing for it to be publicised but in reality that was never going to happen. 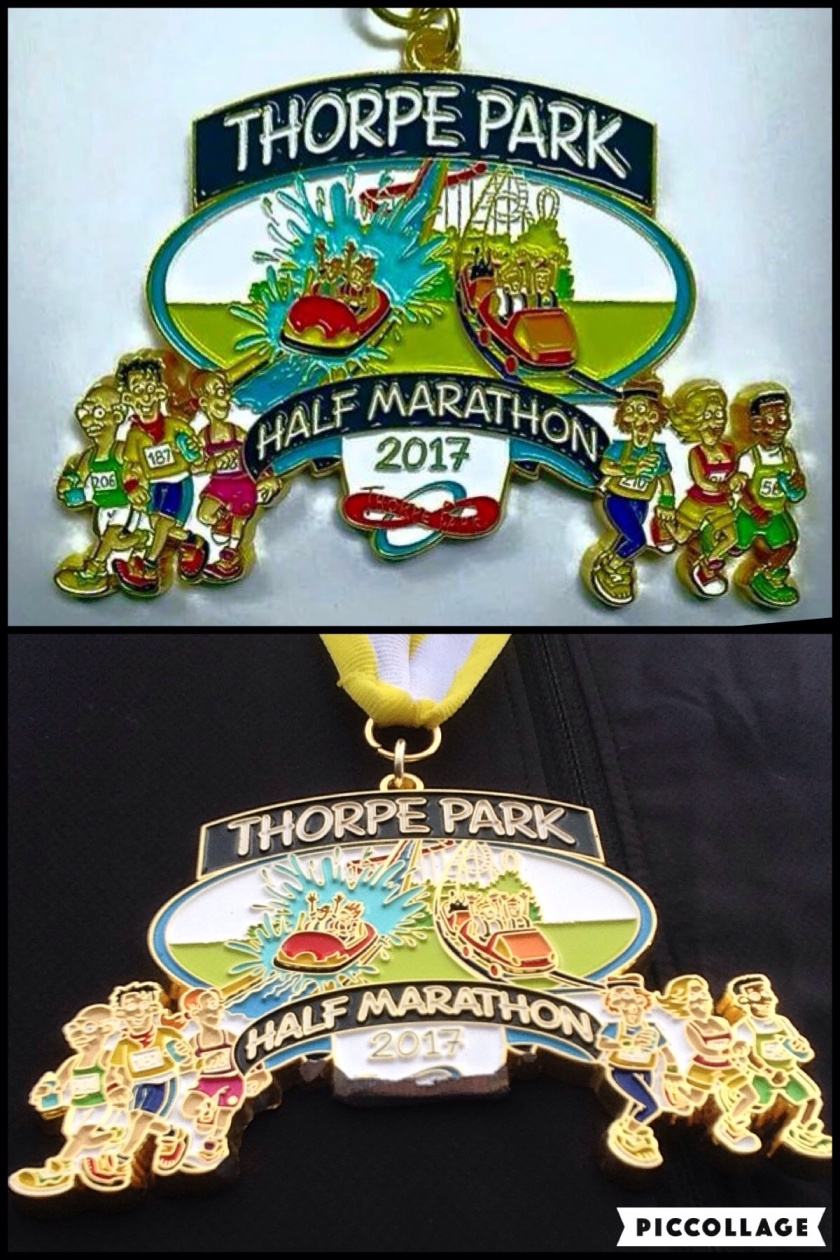 They went on to make an official statement on their Facebook page:

‘Why was the Thorpe Park logo removed from your medal? This event was organised by Greenwood Events and we hired Thorpe Park as a location for our event village. We didn’t get the trademark approved in time for the event, but of course we wanted to reward the runners with a medal at the end. In hindsight we should have ordered the medals once approved, but we wanted to ensure everyone had something on the day after their fantastic efforts. We apologise that timings were tight and will ensure that next time we will start the sign-off process earlier’.

I feel this is the type of openness and honestly people should have been given before the day itself which might have avoided a large amount of the backlash. They had time to get the banner’s, t-shirts and bib numbers done which just read ‘Thorpe Half Marathon’ so they had time to send out an email letting everyone know the situation but that didn’t happen.

I definitely feel that this is an event that will learn from their mistakes and it has a lot of potential. It was a good first attempt perhaps overshadowed by the issues mentioned but for all the negative comments it received there were plenty of positive ones too. Lots of participants went away happy and I was one of those. Spare a though for the guys who had to cut down 4,000 medals at short notice! 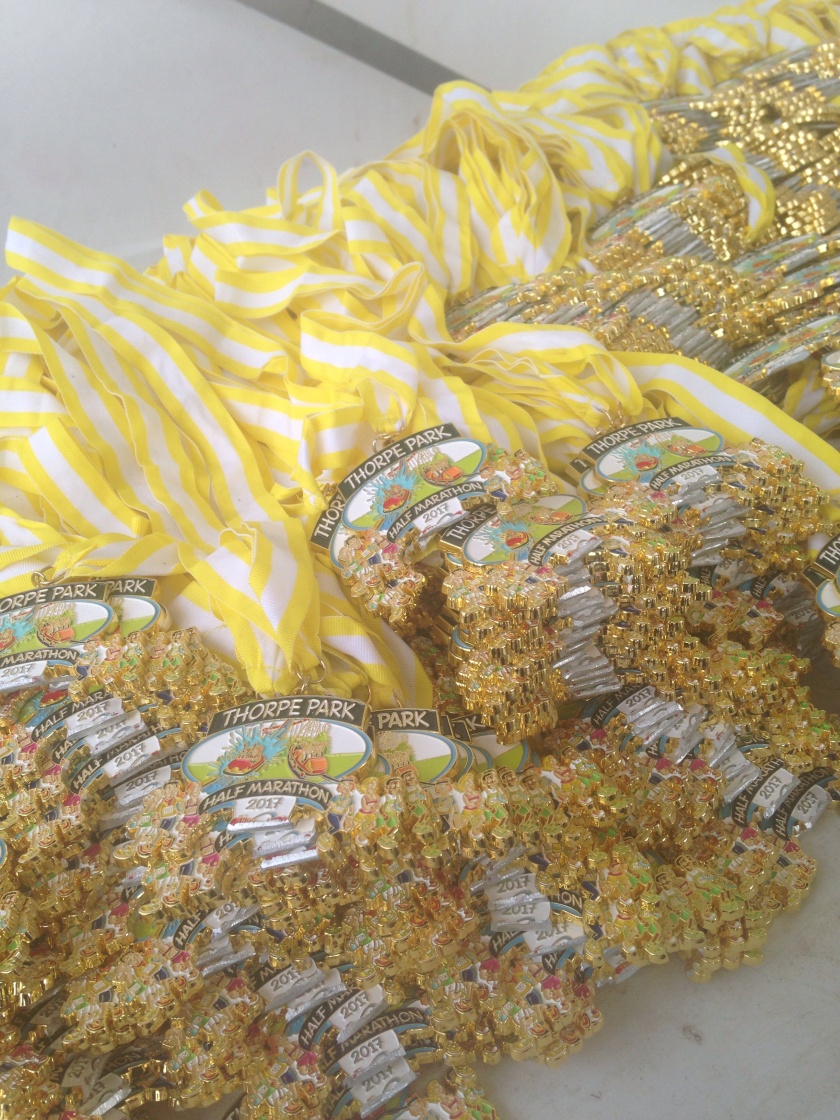 2 thoughts on “Thorpe Park Half Marathon”