‘Run For Your Wives’

One of my main inspirations for setting up Quirky Races came from this event. I’d heard about it several years ago and managed to persuade my wife Becky to take part with me in 2016. It was everything I’d hoped it would be and more. It’s as quirky a race as there is from the concept itself to the prize giving. It’s all I love about a race. Something completely different, crazy and almost unbelievable yet so very real and although great fun hugely challenging too. I also like the fact that it attracts all sorts of participants from those who are just happy to complete it (which is no easy task whatever speed you go) to the highly competitive. 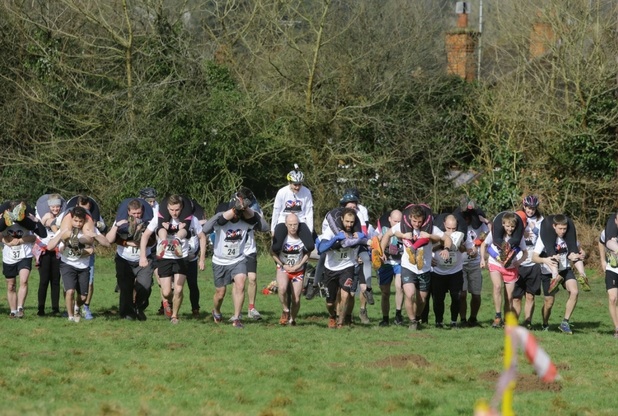 This was the tenth running of this annual event and as well as the loopy carriers and their even loopier wives the media had flocked to Dorking, Surrey.

The course is a short one at 380 meters which can lead to an incredibly deceptive view on how hard it’s going to be. This isn’t over looked in the race instructions sent out by the organisers Trionium though. It’s made very clear that completion is no mean feat with a steep uphill climb for the first half of the race followed by a tricky downhill decent. Four hay bales must also be negotiated both going out and returning as well as a ‘splash zone’ on the way back where several enthusiastic volunteers hurl cold water at competitors from buckets and water pistols. They don’t go easy either. It’s full force straight in the face! 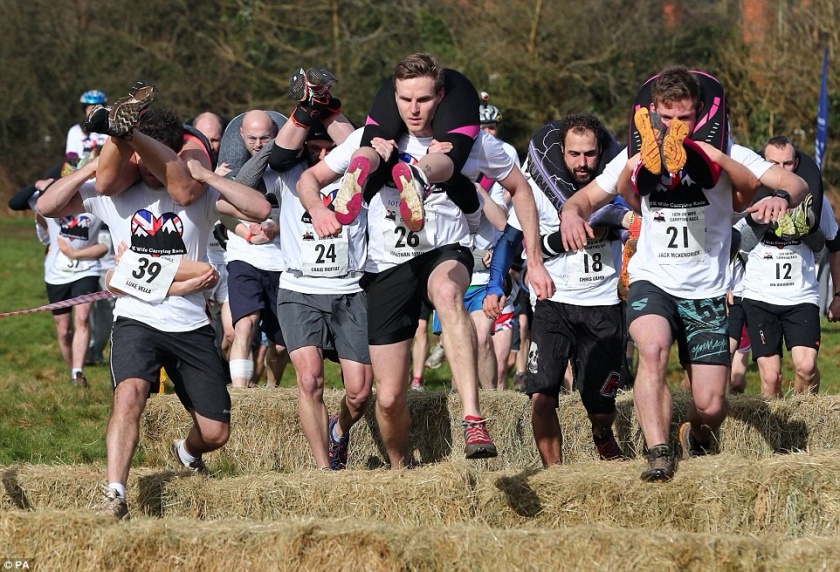 Last year we didn’t really know what to expect. We’d had a few practices but there’s nothing like the real thing. I took off steadily and managed to overtake a few couples by the top of the hill moving us into second place. The leaders had a good gap on us but I traditionally finish strongly and naturally sped up closing on them but I then realised that there’s only a certain speed you’re able to go at without having to hold back cautiously knowing you have your loved one’s safety firmly in your hands. I went as quick as I felt comfortable doing but their lead turned out to be insurmountable. We were pretty happy with runners up spot in our first attempt.

This year we were back, more experienced and aiming to go one better. Learning from 12 months ago I had planned to try to get out fast and get to the top of the hill with a lead.

Firstly though it was the all important wives weigh in at race registration. All wives are required to weigh at least 50kg, if this is not met the weight must be made with the suggested method being a rucksack containing bags of sugar. 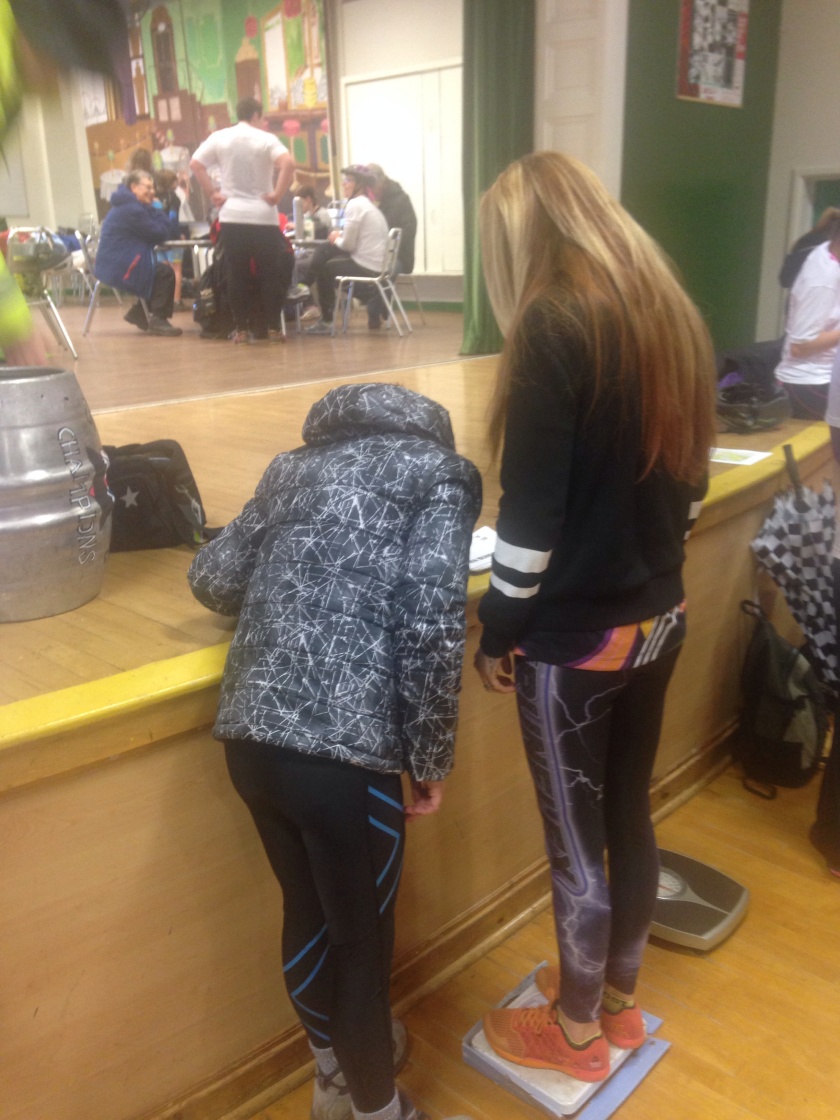 Other rules were made clear in the rather amusing race brief and stated that all wives must wear a helmet and if the wife is dropped at any point during the race the couple must take three steps back before remounting. We were then set off by the race director Robert McCaffrey who also takes part in the race himself (which I love).

The hay bales arrive very early on and I didn’t get the rhythm going over them that several others seemed to. This put us back in forth or fifth place and as the hill assent began I just couldn’t get going. 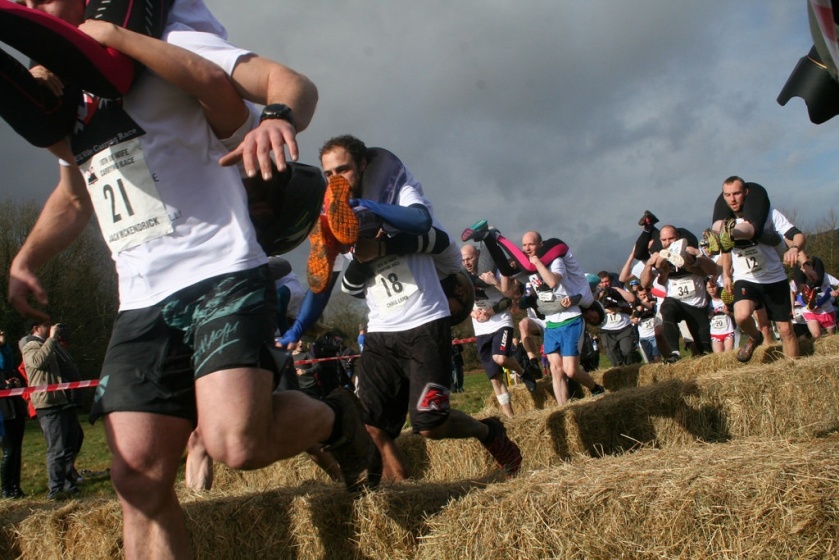 Eventually I found some speed arriving at the summit in third place. I overtook a couple almost immediately after the turn around point but much like last year the front runner was well clear.

It was here that Becky said was the only point in which she was able to see where we were position wise. 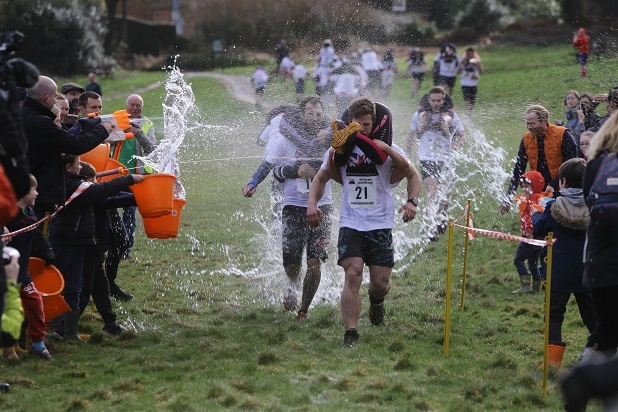 I gave it my all, pushing the boundaries a little more feeling more confident and knowing my wife wanted the win as much as I did this time. We got level just as we arrived at the splash zone. After a drenching the final few meters was literally a blur with water soaked in both my eyes. This combined with the final time over the hay bales stumped my momentum and we crossed the line again in second place, this time less than a second away from victory. 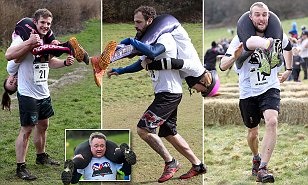 I must admit I was disappointed but you can’t keep a smile off your face for long at this event. All it took was a look back to see all the other couples coming in using various different carrying techniques and the surreal nature of what was going on came flooding back.

More laughter was to follow shortly after at the presentation. Firstly the award of a ‘pound of sausages for strength’ was given to the carrier of the heaviest wife. Not surprisingly the same couple came last and for that they were awarded a Bombay Bad Boy Pot Noodle and tin of Winnalot dog food. The race winners were presented with a barrel of ale and £250 towards their travel to Finland for the World Wife Carrying Championships (yes, that race exists too) but not before Robert awarded himself a tin of pilchards and a can of mushy peas for being the oldest wife carrier in the race. 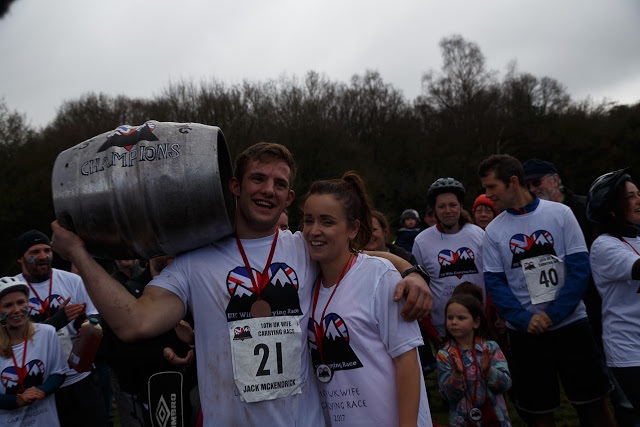 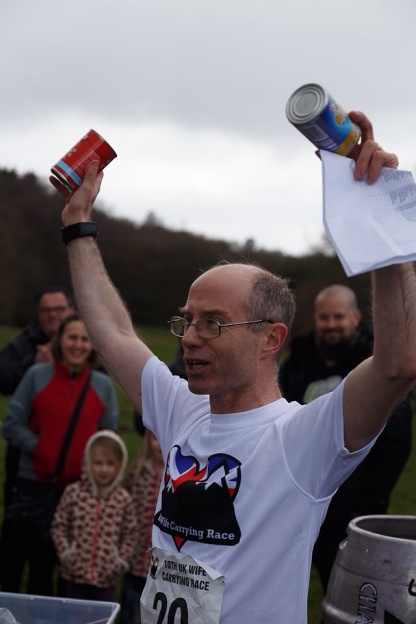 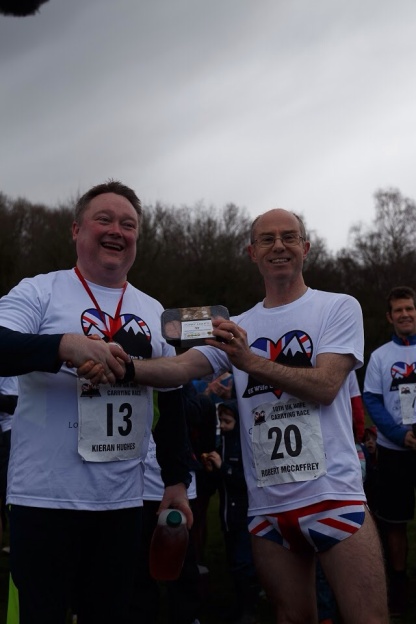 The following day it became evident just how much attention this event raised as it featured it all eight of the main national newspapers, on BBC Breakfast, The One Show, Loose Women, CBBC Newsround and on the Nightly Show amongst others.

The Daily Mail’s headline read that this is the ‘Most gloriously un-PC sporting event in Britain’. Mr McCaffrey responded to this in typically humours fashion by stating “what rubbish! We welcome everyone – from home and abroad, in ALL gender combinations of carrier and ‘wife,’ married or not, younger and older, lighter and heavier and whether fit or no so fit. This is probably the most ‘PC’ race in Britain!” 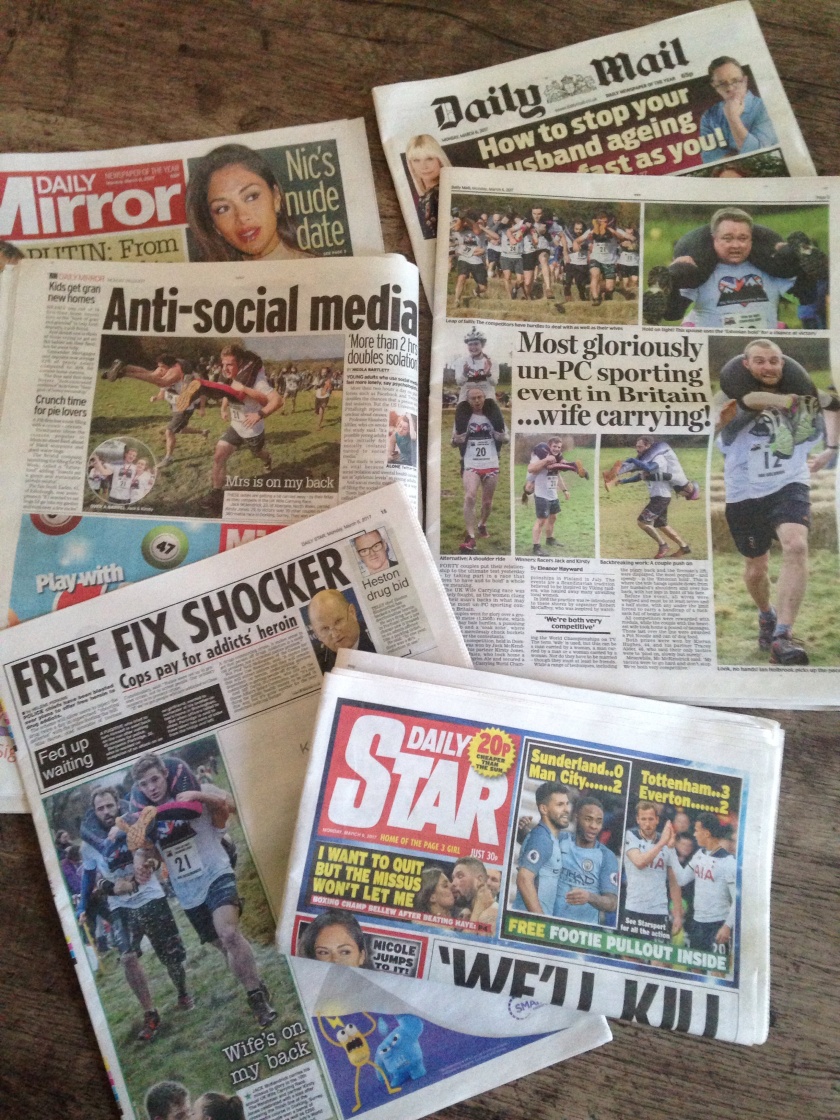 It was great to see a relatively small event (around 30 couples took part this year) receive such a large amount of publicity and it just goes to show how much interest quirky races can get if the concept is different enough and dam right crazy enough. A huge well done to Trionium on a putting this race on for a full decade and long may it continue for many years to come.