Every Easter Monday in a little village called Gawthorpe in Yorkshire the community gather to celebrate the erection of the Maypole. The spectacle attracts thousand to line the main street, but they also come to see hundreds of men, women and children compete in the annual World Coal Carrying Championships. This is a one of a kind event where men carry 50 KG and women 20 KG sacks of coal over a 1km road course.

Registration takes place in the Boot and Shoe pub surrounded by locals secretly chuckling at all the weird and wonderful people invading their village and paying to do something they used to get paid to do when the pits where open, in fact rumour is that’s how this event all started with a bet over a pint, who could carry a coal sack between two pubs the fastest.

Participant were given a t-shirt and race number already attached and an awesome certificate saying you have taken part. The shirt must be worn for the event, you can’t run in club colours but that’s part of the fun for me, no politics just a bunch of people getting together to push themselves and help each other out.

This is not my first time of doing the race so I knew what to expect. The course starts at the Royal Oak pub and gently inclines for the first 200m before a slight decline for 200m, it then turns right onto the high street for a further 100m before a 90 degree right turn and the actual hill starts for 150m before levelling off and running through the throngs of cheering supporters until you get to drop your sack at the maypole at the finish line.

Today I was running in both the veterans race and the men’s elite race so my plan was to just finish both races with no heroics. I made my way to the start lining up along side four time winner John Hunter who was preparing his sacks ensuring the coal was evenly distributed and the corners were nice and tight to grip. Some people wore gloves, I chose not to.

As the road was closed everyone dashed for their sacks, I just hung back not wanting to carry it any longer than one needs and that meant I got the one that was given to me, banging it to settle the coal and rolling the corners around I heaved and settled it high on my back pulling the corners forward so as to keep it balanced.

The cry of “Runners ready, get set” was bellowed immediately followed by the bang of the starter’s gun and we were away. The gazelles of the coal carrying world quickly set off as I settled into a steady pace, one foot in front of the other, head down looking at the floor ahead of me. I was in around 20th position out of 30 starters as I crested the first incline, going down I could feel the lactic acid building and as we turned right onto the main street it was starting to burn the muscles. I knew from my previous experience that this was where many of the ones who set off fast start to walk but my plan was to make it to the last turn before the big hill before stopping my run. I dodged past the walkers making up several positions before my calves started to instantly combust and I had to slow. It was also at this point my grip started to slip, I had seen other runner already dropping their sacks or had needed help lifting them back up higher on their shoulders. I know from before that the moment the sack starts to slide it effects everything so I tugged it higher, regripped and continued to focus on putting one foot in front of the other.

I reached the crest of the hill to be met with cheers and applause from the crowds. My legs responded. Head down the plan was the faster I finish the sooner the pain in my calves stop and the cramp in my hands will subside. As I neared the finish I passed a few unlucky runners that where struggling and wobbling along the road. Shouts of “50m to go” filled my ears and the legs kicked on again, finishing in a flourish I ran to the line throwing my sack down on the waiting haybales.
My lungs where burning, my calves where on fire and my hands wouldn’t open for 5 mins because I held that sack so tight but I’d made it.

A volunteer came over to me and told me I was 12th place in a time of 7 mins 34 seconds. I was well chuffed as I wasn’t expecting it and this was my personal best time.

I spent the next 2 hours trying to recover and watching the women’s event before it was time for the men’s elite race. Not sure why I was in this but that’s the wave they gave me. Last year’s top three men and four previous champions were all in the lineup. This was going to be a ferociously paced race for some, but not me. My plan remained the same and I ended up running pretty much an identical race with the exception I finished in 19th spot but my time was quicker with 7 mins 20 seconds.

Gawthorpe World Coal Carrying Championships is an amazing event. There are no egos. On that start line you all look the same in your yellow t-shirts with a great big bag of coal on your back. The course is exactly the same for everyone, spectators cheer on every participant without favour and when you finish everyone pats you on the back and shakes your hand saying well done. This is how running events should be and why I return every year.

As a foot note I’d like to give a special mention to Joel Hicks who supports this race with his charity Always With A Smile. Joel ran the first race of the day with two coal sacks and then went on to complete all the other events, SEVEN in total. That’s 7km and 290 KG of coal shifted! 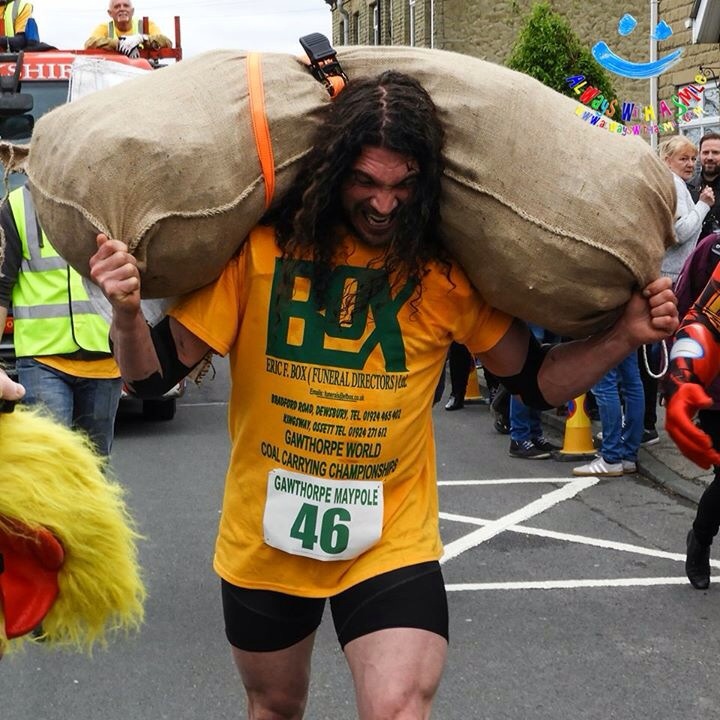