Obstacle course racing (OCR) is one of the worlds fastest growing sporting activities. Just like so many others we at Quirky Races enjoy getting wet and muddy while having a great workout of a weekend but what we love even more is a new and different concept. Step forwards Iron Ram.

This is established and well respected industry event provider The Ram Run’s creation and involves a short course OCR of just 1 mile with a format of rounds and elimination. We’ve seen something similar to this indoors before but never outdoors. It was to be held at Cliff Lakes, ‘West Midlands premier watersports and events venue’, who also just happen to have their own OCR team and permanent obstacle course. It promised a lot but could they deliver? We were lucky enough to get an invite to see for ourselves so naturally we sent our top (and most competitive) obstacle course racer Chris along. 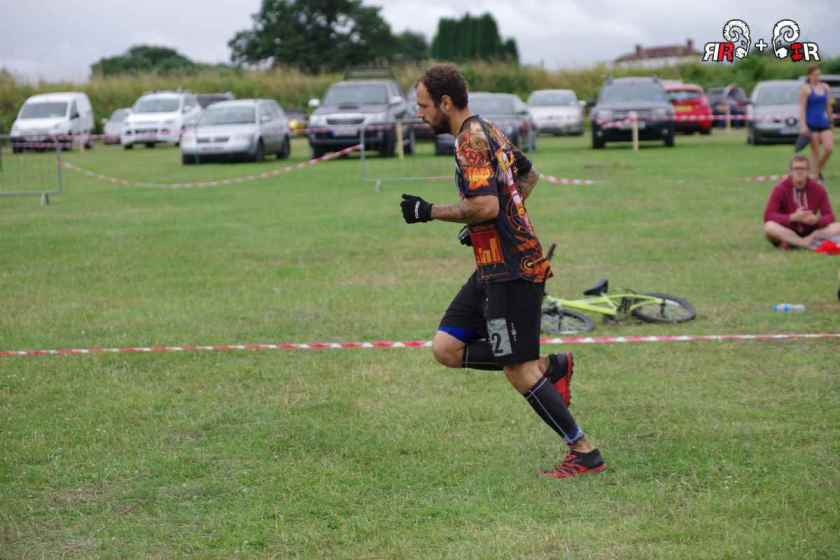 I was as much intrigued as I was excited for this event. They had sent out a course map pre race but like most OCR’s some of the obstacle names meant little in the way of knowing what it actually was and I had no idea of what the terrain would be like or how much mud and water to expect but arrived in good time and with the course being so short I was able to jog around it all to see exactly what was to come.

It had been advertised as two rounds, a semi final and a final but at registration we were informed that one of the rounds had been dropped for the males and that it would be just two rounds for the females due to less than anticipated participation number. This could have been seen as a disappointing factor but in light that every entry was already getting a free place into the afternoon’s full 8 or 16KM races as well as the Autumn Ram Run event in October (all this for just £40) nobody seemed too bothered and I can confirm that after round one almost everyone was thankful that they had one less time of going through what was a thoroughly energy sapping course.

There were just under 80 runners in total which was more than enough to fulfil the pre event advertisement of ‘A great challenge for the ultra competitive racer but also a great personal challenge for someone just ready to give it a go!’ The 40 fastest participants would go through to the next round and as one round had been cut it was said in race director Iain Exeter’s usual comical race brief that anyone who didn’t make it through but wanted to go again would get the opportunity to do so later in the day.

I was pretty confident I was going to make the top 40 without having to go too hard so I planned to use the first round to test out the obstacles and work out the best strategy for the semis. We were set off in groups of four every few minutes from 9am. Once it was my turn I picked up the 20KG weights attached to straps (one in each hand) and set off on my way up the 25 meter grass course and back. 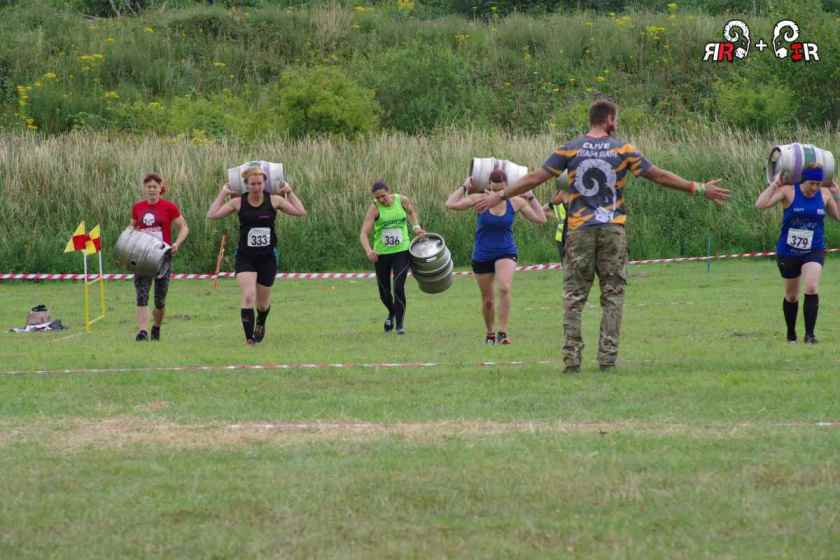 It was then a short run to a 50m beer keg carry followed almost immediately by a 100m sledge pull and a 100m punch bag carry.

Finally into some running this was broken up with some hurdles to jump. At the end of the straight we reached Cliff Lake’s permanent obstacles but only actually did the a tyre run/ crawl and their 8 foot wall separated by Ram Run’s signature huge rounded hay bales.

‘Steeplechase’ followed which was another slightly further run while jumping the ‘Yellow Perils’ (hurdles) before a really tough 70m out and back water walk carrying a 25KG weigh above our heads. Arms had to be straight at all times and the weight must not be rested or there was a 10 burpee penalty, as there was for any other failed obstacle. This was really hard going especially at this point in the course and the most heavy section of obstacles was still to come.

Named ‘The Ram’s Inferno’ this was 250 meters which included 3 tilted walls, a pole under traverse then a technical multifunctional rig with all sorts of hanging and balancing objects plus a pole over traverse before a sprint to the finish line. 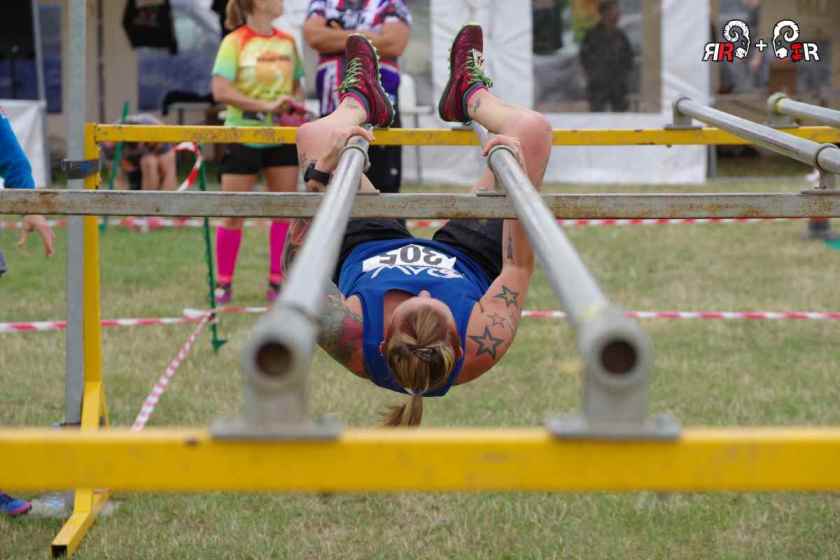 One of the standout features of this event was the impressively efficient timing system from Race Timing Solutions. A chip on participants shoes was recording our times as we crossed a mat under the finishing arch and they could be viewed instantly, in the correct order, on two laptops. It normally takes at least a day or two for races to publish results yet here literally one man from the back of a van was making magic happen.

I had stuck to my plan, saved plenty in the tank and still managed to record the 7th quickest time which gave me the confidence that I could do pretty well. After a little rest and a bacon sandwich from the venue’s cafe I was ready to go again.

Now the racing really started with only the fastest 8 going through to the final. In the first round we were able to pick our own groups to run with but this time we were called up based on times from the previous run.

I took the lead from the start in my race and held it throughout. I pushed hard but felt I still had something more for the final. Again I was able to find out my time/ overall position straight away and I was a little surprised to see I had ran the fastest of all 40 runners.

We then had about 45 minutes to recover before the final and in that time we were able to get our pulses racing by watching the women’s final which promised to be fast and competitive and it didn’t disappoint. As well as being a great racing platform this event also offered a fantastic viewing spectacle. The short distance made winning margins much tighter which allowed for added excitement and the whole course could be seen from the start/ finish area. The final section of obstacles also meant the whole race could be won or lost in the dying seconds.

It seemed like everyone had stayed to watch the finals and those doing the afternoon’s race had also began to arrive as the crowd gathered in anticipation for the men’s showdown.

My tactics were to hold back a little in the early carries but not let anyone get too far ahead then use my running speed down the first straight and go all out from the far end heading back. The race played out perfectly for me as I found myself in the lead on the punch bag carry and build up some daylight between the rest of the field without really laying the hammer down.

This was a leading gap that I was able to extend on the run back towards the water walk which was the part I really wasn’t looking forwards to but turned out to be where I pulled away further before hitting the walls. 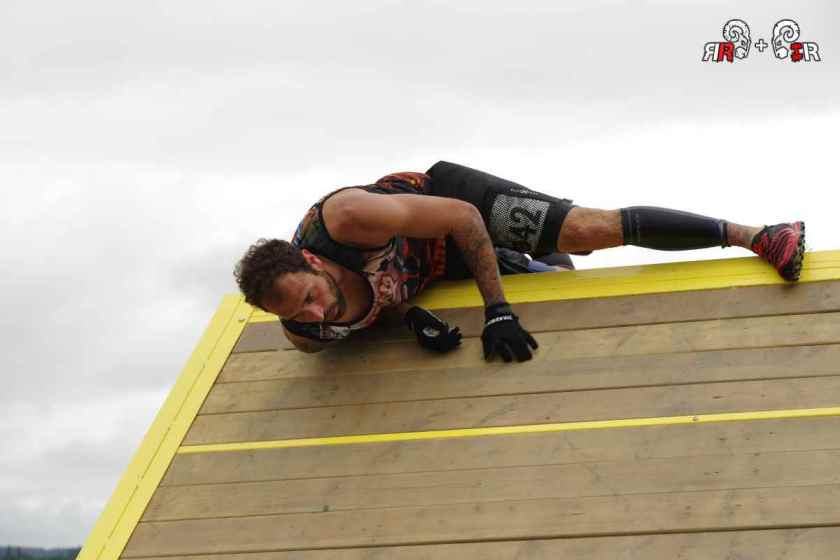 I knew all I had to do now was get through the rig without making any silly mistakes and the win was mine. Almost as soon as that thought had gone through my head though I slipped from one of the hanging rings and was left dangling one handed. I reached to the ring once and missed. I reached again and missed. Everyone was catching up and I knew letting go would result in disaster.

I found some extra strength from somewhere and propelled my body forwards finally making the required reach. The ring was in my hand and I knew that was the last mistake I could make. Three runners were now right back in contention. I needed a clean run and I needed to do it in a hurry.

Balancing my way across the slack lines, hanging from the ropes and swinging through the trapezes I was onto the very last obstacle, the pole traverse. I’m not sure I used the most pretty of techniques but it got the job done and I sped my legs as fast as they could go to the end winning by a little over a second.

Looking back now I’m kind of glad I had that little slip on the ring as it gave the race the excitement it deserved and elaborated the fact that anything can happen in an event of this nature. It almost guarantees exhilaration for both runners and spectators alike which most certainly means it should have a place in this developing sport. Well done to The Ram Run. They took a risk, tried something different and it delivered with flying colours.