You’ve got to see it to beerlieve it

As the IAAF World Championships was reaching the end of its penultimate day less than 20 miles away on the other side of London another world champs was about to begin. Like many of the events in the London Stadium this one also involved running, it was held on a 400 meter track and top class athletes from all over the globe were competing. The difference here though was that every runner downed a beer before each lap! This wasn’t a forfeit or a act of celebration, this was part of the event rules.

Four laps of the Allianz Park athletics track equalling a mile with a beer before each one and just as Usain Bolt was pulling up in front of nearly 60,000 people as the Athletics World Champs reached it’s climax, the Beer Mile’s own pre race favourite, European record holder Dale Clutterbuck was doing the same in front of significantly less people. But Dale wasn’t clutching his left hamstring, He had just been sick which under event rules resulted in a penalty lap or disqualification.

What I liked most about this event, other than its exceptional quirkiness of course, was its inclusiveness. There is no elitism here. Yes, it’s a world champs but there are also unseeded open waves and relays open to all. Make no mistake, the main races of the evening are very serious. The runners are representing their countries and a world title is at stake. Racing spikes are worn and competitors bring their own pre selected beers (under the rules they have to be at least 340ml and 5% in strength). In the open races however fancy dress outfits are common place and the beers are supplied in the form of small Heineken cans.

On arrival I was surprised by the lack of people at the venue and expected more spectators would arrive later on as the top seeded races got underway. This didn’t really happen and the stands that surrounded the track remained empty throughout but this didn’t mean there wasn’t an atmosphere as the supporters that were there along with almost every runner gathered trackside along the home straight and start/ finish line where all the action went down to shout, cheer, sing, abuse and laugh at the antics that unfolded along with two comically dressed commentators who combined to make it a truly entertaining evening. 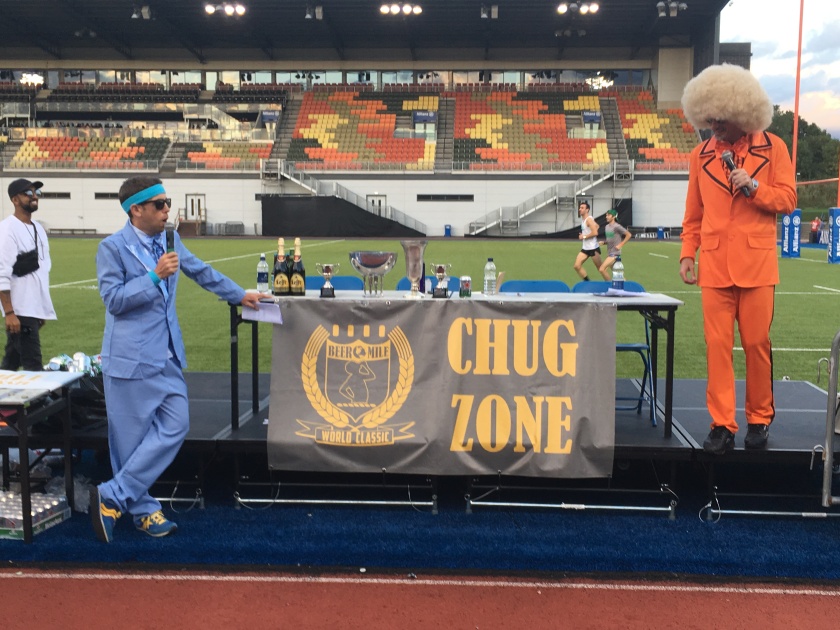 Early on it was all about having fun as the open race participants displayed some pretty slow running and some even slower drinking but every now and then a competitor would pop up with either the drinking skills of Paul Gascoigne or the running skills of Seb Coe which really wet the pallet to see how many could combine the two as the business end of proceedings approached.

There was a gap put in the schedule at the time of Mo Farah’s 5,000m final but oddly no access to anywhere to watch it so as some gathered around those who could livestream it to their smartphones others amused themselves by viewing on impromptu ‘beer off’ where two runners ran just under half the straight downing a can after every 10 meters. 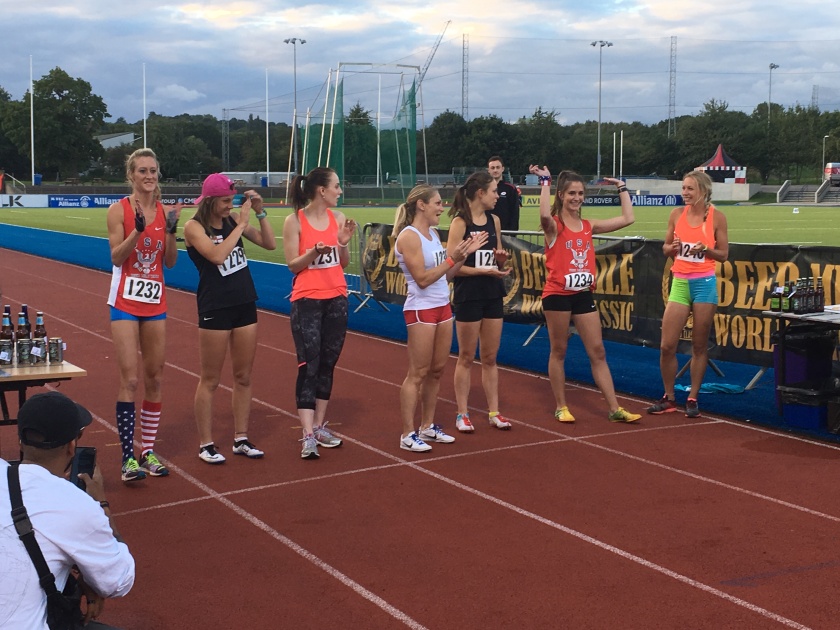 It was then back to the main action and time for the worlds best beer milers to step forwards. First up it was the ladies and this race elaborated how anything really can happen in this event as not only the slowest drinker off the start line but also the fourth runner across the finish line, Bryony Pearce of England, was crowned the champion as all those in front of her were either sick or fell foul to the rules of leaving too much drink in their bottles/ cans. In the seeded races all beer containers were taken away and emptied to measure how much liquor remained. If the amount remaining was over the maximum level (pictured) they runner was disqualified.

After a men’s B race it was then time for the main event. The men’s A race where it was widely fancied that the world record, an astonishing 4.34 set by Canadian Corey Bellemore at last year’s event, would be broken. Anticipation was high. The first few took off at rapid speed and the record was on. It was going to form as Clutterbuck was out in front but he wasn’t having things all his own way and although his running was strong his drinking was letting him down and America Chris Robertson was right on his tail. At every beer Robertson would pull away then Dale would reel him back in and go past on the run. This continued until the final beer and as Chris sunk it in one and proceeded for his last 400 meters Englishman Dale began to lay chase but just as he set off disaster stuck. He puked. Game over! 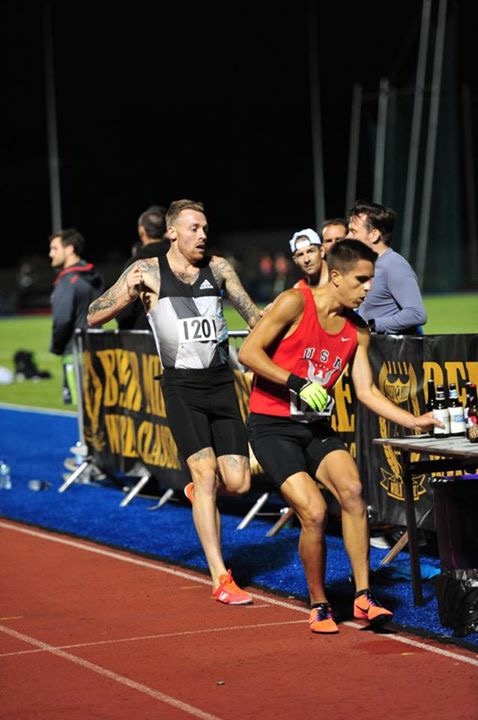 There was no stopping Robertson and he came home victorious in a time of 4.52 so well outside of the world record but the only man in the field under 5 minutes and a full 10 seconds clear to his fellow countryman Garrett Cullen in second with Brandon Shirck making it a clean sweep of the podium places for the United States.

Just how tough it is to get the beers down then run at such speed was elaborating by the fact that 26 men took part in the A and B races combined, 9 of which were disqualified for have excessive beer leftovers and a further 2 took penalty laps for being sick.

Before the night was over there was time for more fun with the open relays. Teams of 4 took on 1 beer and 1 lap each. This really emphasised the inclusiveness of the event as teams could be assembled there and then and it seemed the typical drinking spirit of ‘go on then, just one more’ what coming out as almost everyone got involved.

Having had such an enjoyable evening I was left pondering why more people hadn’t showed up to witness such a sceptical. From my own thoughts and the general opinion gathered the overriding factor and only real negative to come out of the whole event was that the venue was too inaccessible, over 2 miles from the nearest tube station. Saying this I can’t imagine there’s a whole host of facilities queuing up to host an event where running under the influence and chundering are normal practice.

If we are lucky enough for our country to host the champs for a third successive year in 2018 then I would urge anyone who is looking for an evening that’s a little bit different and a whole lot of enjoyment to get involved whether that be to take part or to spectate.