Skip to content
Review by Nigel Holmes.
This is an event series for all the family held by Guide Dogs charity with sensory experiences on route. There are 5 sensory stations Including taste, see, touch, smell and listen. I took part in last year’s event so I knew what to expect but I’d say that the 2019 event was bigger and better than 2018. Despite the threat of rain in North Manchester the numbers were up with 800 people registered and fortunately the rain held off whilst we ran.

The 5k route took the form of two 2.5km loops and gave the option for some to do a single loop. The event is perfect for young children as the number of sense stations around the route break it into smaller, more manageable chunks for little legs to handle.

I’m not sure what the first ‘taste’ station offered as myself and my running partner were on a mission to rip apart the assembled field of children and fun runners. Last year there was popcorn and candy floss, my briefing notes say that this year there were sweet and sour options.

I’d been approached to lead this run last year as I’m a regular pacer runner at the parkrun that also takes place in Heaton Park so I asked the organisers if I could lead the race whilst guiding my visually impaired mate called Danny.

The course was simpler than parkrun because it was two laps of 2.5 km and we could make sure we were at the front for at least the first loop. Danny has a condition called Retinitis Pigmentosa which has left him with less than 10% vision since childhood. Normally he navigates using a cane rather than a guide dog, especially not a human sized one but that’s what I’d chose to dress as for the event! 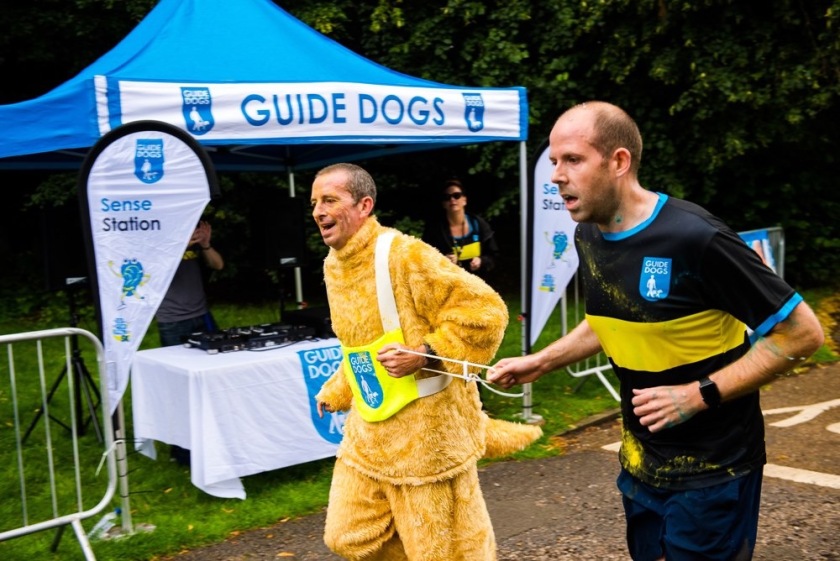 We set off from the front as we’ve found it easier for quicker runners to overtake the pair of us who are tethered together by a looped shoelace than for us to make our way past slower runners in the congested first few hundred metres of any race. We hoped to lead for the first lap as Danny’s 5k PB is under 23 minutes and the run was won in 25 minutes last year. Danny absolutely flew off the start line along with some giddy young lads who I expected to fall away within the first kilometre. I begged him to slow up a bit as I had the extra complication of running whilst wearing a furry dog costume. I was concerned that the trousers of this one size fits all suit might start to slide down my slender frame but as it turned out they stayed faithfully around my waistline for the duration of the run.

We turned for the first of two noticeable climbs on the route and Danny knew this first hill was short and followed immediately by a long downhill so he attacked it and we moved through the field to take up 2nd place. The second sense station was ‘sight’ and took the form of coloured powder paint that was fired at us and then on the longest uphill section on the course there was a ‘listen’ station with a DJ playing encouraging music to help us up the hill towards Heaton Hall. The music certainly lifted the pair of us as we took the lead on this climb. At the top of the park we skirted around by the golf course and the most ingenious of the stations, this time to stimulate our sense of smell, was a machine generating mint scented bubbles.

This was soon followed by a steel band to stimulate our ears before a sharp downhill to the finish. Just before the finish line we waded through a carpet of foam bubbles. We’d smashed out the first lap in 10 and a half mins breaking the hopes and spirits of the assembled field of children and fun runner but the pace started to take its toll. We had the complication of lapping people through most of our 2nd lap and despite me ‘barking’ out warnings of a guided runner coming though many were startled by Danny and his giant dog. 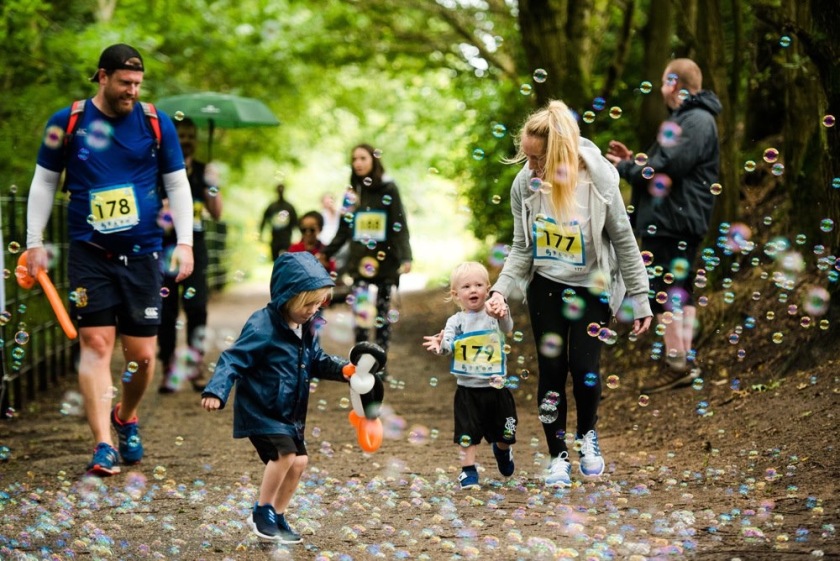 Despite slowing up in the 2nd lap we held first place which delighted the ever competitive Danny and I was left wondering whether there were any Gunniess World Records relating to giant dog suits! 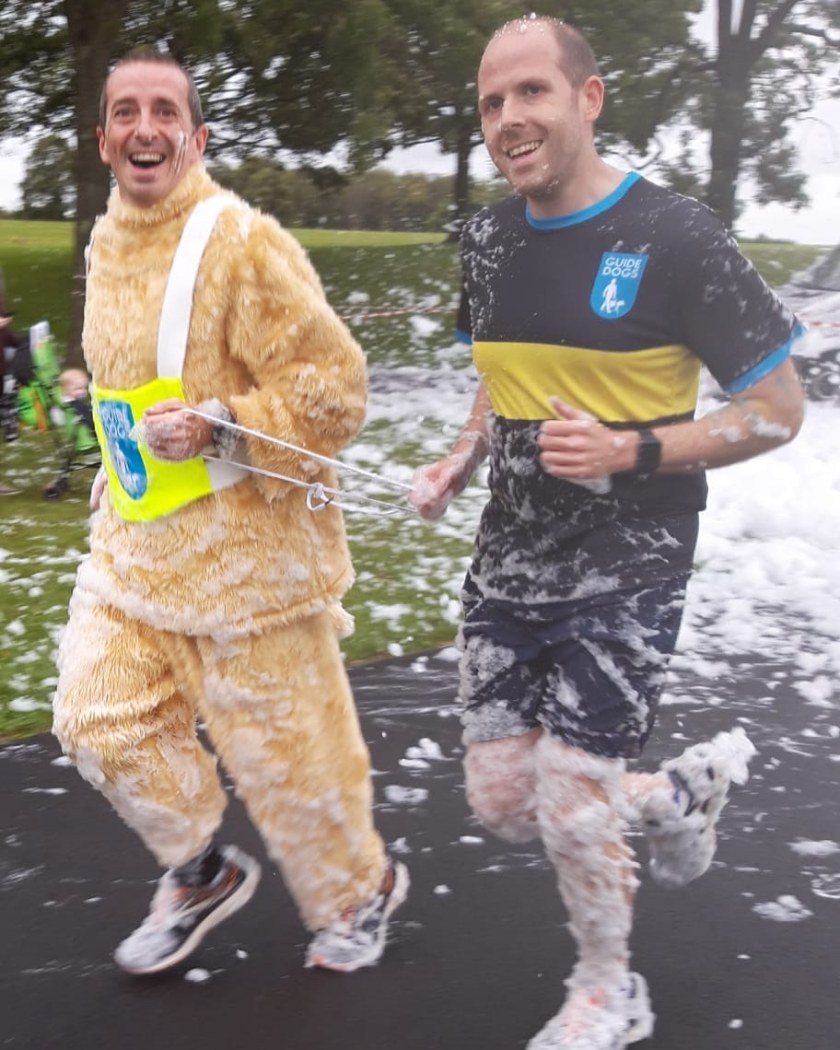 This would be an ideal first 5k for children and people are welcome to walk it as well as run it so it’s very inclusive. Heaton Park is a great venue with good facilities. I hope they return next year as Danny and I will be sure to be there to lead it out again.

There are still two more events in the series this year if you fancy giving it a go. One in the Midlands next weekend (17th August) and one in Scotland in September. Check out www.guidedogs.org.uk for all the info.