I love running and I love Disneyland so when I found out that there was such a thing as ‘Run Disney’ pretty much all my dreams had come true. I booked up the whole family for a long weekend and off we headed to Paris.

The event consists of a 5km on Friday evening, a 10km on Saturday morning and a half marathon on Sunday morning. You can do one, two or all three races and there are also three different kids races with distances of 100m, 200m or 1km depending of age. Always wanting to do as much as I can, I was doing the 36km challenge (all three races) and my son was in the 100m and my daughter was doing the 5km with me as well as the 1km so we had almost everything covered.

We arrived in Disneyland early Thursday afternoon and spent the day on the rides, catching a few shows and watching the famous parade before visiting the race expo in the Disney Village. There wasn’t a lot going on but a couple of fun things to keep the kids entertained while I stood in various queues collecting each individual number and t-shirt for every race we were doing. I ended up leaving the marquee with 8 t-shirts and worked out that if all went to plan we’d be going home with 8 medals between us too!

After spending the whole of Friday walking round both parks from ride to ride my legs were already pretty tired and the racing hadn’t even started yet! As evening fell we returned to our hotel to change into our running gear (well I say running gear, I was actually wearing an Ironman morph suit) and then headed to the Disney Village ready for the 8pm start time.

As you can imagine this is a very popular set of races with the half marathon peaking at 9,000 runners. There are five pens separating participants labelled A-E. Each pen is released to the start line one by one then groups of 100ish runners are set off 30 second apart. I had been allocated in pen E but luckily my daughter was in pen B so I was allowed in with her. This meant we didn’t have too long to wait before the much anticipated start.

The 5km course took us past the Disney village where crowds of supporters gathered then into the Walt Disney Studios Park, through the indoor shops and restaurants promenade then around the park past the rides including through Toy Story playland before heading around the back where there were lots of storage units and the unexpected addition of a fire station where all the fire fighters were lining the course cheering us on. We moved to their side of the course to give them all high fives.

It wasn’t long before we were back in the theme park and heading towards the last kilometre where several characters were available for photos. This did involve some rather large queues though, not something we fancied doing during a run. There was traditional Disney music blasting out and marshals all over the course which was fenced and coned in all the necessary places.

The only negative I could give about this run was the underwhelming finish line. I actually had to question if we had in fact finished but within a few steps I saw the workers giving out the medals and that was race one done. We headed into the other park to watch the magical illuminations then got some dinner and went back to our hotel for some sleep with a very early start the next morning for the 10km.

You don’t have to stay in one of the many Disney hotels in order to take part in these runs but with a 7am start for the 10km and the half marathon it’s certainly an advantage to be close by. I’d managed to get bumped up from pen E to pen A due to my half marathon PB so this time I had less waiting before the off. 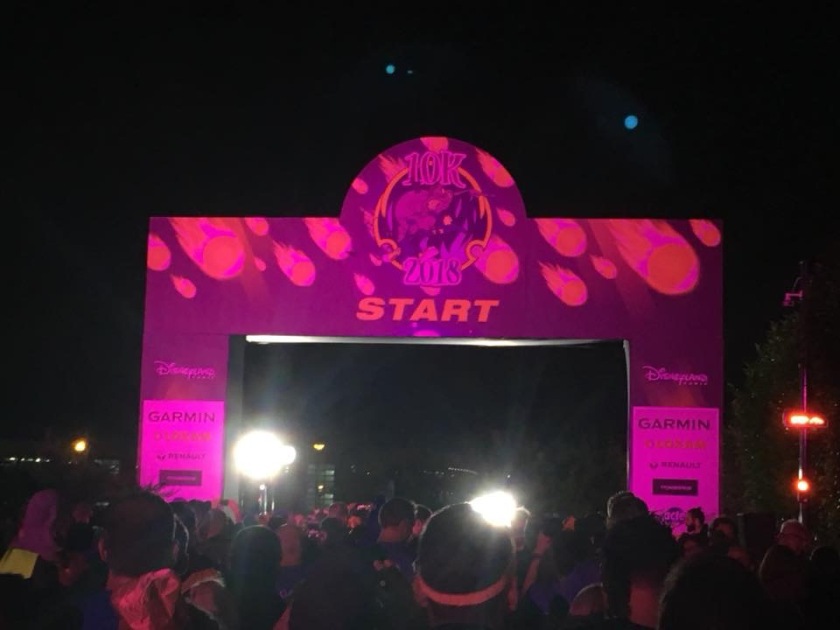 I wanted to push this one a bit harder so got as close to the front as I could but that still wasn’t as close as I’d have liked. I wondered what time all these people must have got up to get to the start so early as I tried to squeeze my way through the crowds while listening to the legendary Paula Radcliffe who was up on stage as the event’s ambassador. She was also running all of the events herself.

Three groups were set off before me which meant a bit of a hold up on the first few hundred meters which featured a couple of tight bends before the course opens out a little more and the runners began to spread out. I was constantly overtaking people as I built on the slow start.

The course followed the same start as the previous night’s route though the Walt Disney studios then looped back round and into the Disneyland park which involved the special moments of running through the castle itself.

There are all ability levels taking part from walkers to top class athletes and as I got closer to the front it was good to see lots of other runners on the many switch backs on course especially as I approached the last few kilometres and saw all those would had only just been set off.

On one of these switch backs I was surprised to see marathon world record holder Paula going one way as I was going the other. She had started right at the front so I must have made up quite a bit of ground on her and this pushed me over the final part to see how close I could get to her. I didn’t manage to catch her but she was at the finished area as I crossed the line so I took the chance to have a photo with her. This nearly wasn’t possible though as it had been pouring with rain for most of the run and my phone wasn’t working as it had got so wet but luckily a very kind marshal dried it off for me before capturing the special moment.

After the late night we’d all had then my early start I managed to get back to my hotel room before my family had woke up. It wasn’t long before we were all back out for another day of rollercoasters though mixed in with the children’s runs. Unfortunately these didn’t run as smoothly as the two races I’d done so far as there had been a printing error on the event schedule meaning everyone turned up for the start an hour early. After lots of waiting around an announcement was made about the error and eventually proceedings got underway starting with the youngest kids sprints then the longer distance which involved a full lap around the lake for the older children. They all looked very pleased to meet mischievous character Stitch at the finish line before being lead through to a secure area to be reunited with their parents upon showing a wristband which matched theirs. This was a great touch to ensure the little ones safety.

On Sunday it was time for the main event. The half marathon. This was the only race that was officially timed with results and finish positions published so I got up extra early for what was another 7am start to ensure I got off right at the front this time. It felt pretty special to be standing on the start line right next to Paula Radcliffe amongst many other top runners. These events may have a fun run type feel about them but this race in particular still attracts some elite standard athletes. This was evident from the speed several went off at as we were started off taking the same route as the previous day’s 10k before heading along a long straight road and into a residential area where many people had come out their houses to cheer us on. This was the first time any of the run routes had taken us out of Disneyland itself and it was really nice to see the surrounding areas.

Next up was a picturesque lake to run around before taking the same route back which gave an opportunity to see lots of the other runners. I wondered what all the commotion going on just behind me was before realising I was just ahead of Paula who was in a group desperately trying to run alongside her. I knew she’d be operating at a consistent pace just tried to focus on doing the same to remain ahead and hopefully real in some of those that had gone off super fast. 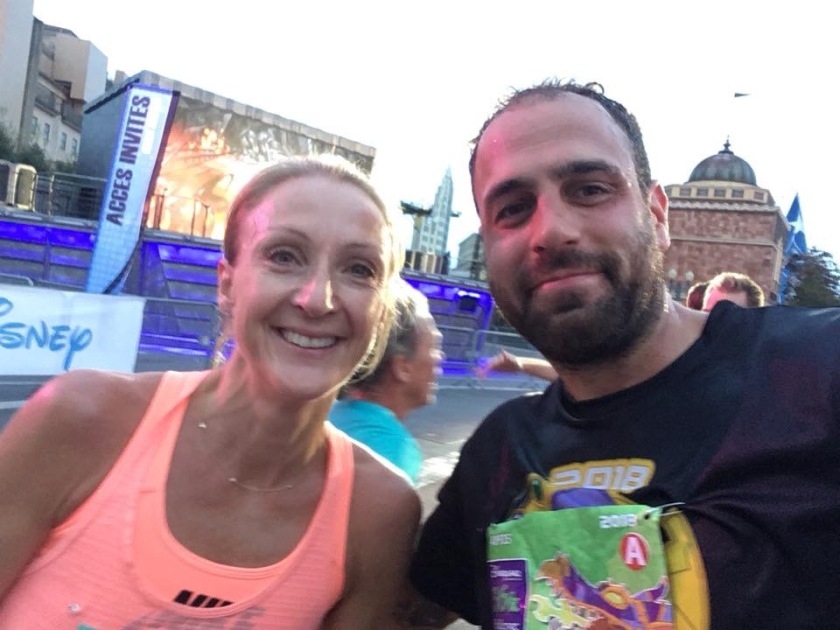 This tactic worked as I found myself overtaking several fellow competitors as we ran past some of the Disney hotels and arrived back into the theme park. We then took on the same lap around the lake as the kids had before going by lots of the rides then into the finish. I was pretty chuffed that I’d managed to stay ahead of a certain multiple time world champion and as she did finish again took the chance to have a photo. This topped of what had been an amazing weekend of running and one I’d love to return to one day or maybe even take of the same challenge in Disney World, Florida which also includes an extra day with a full marathon to finish! 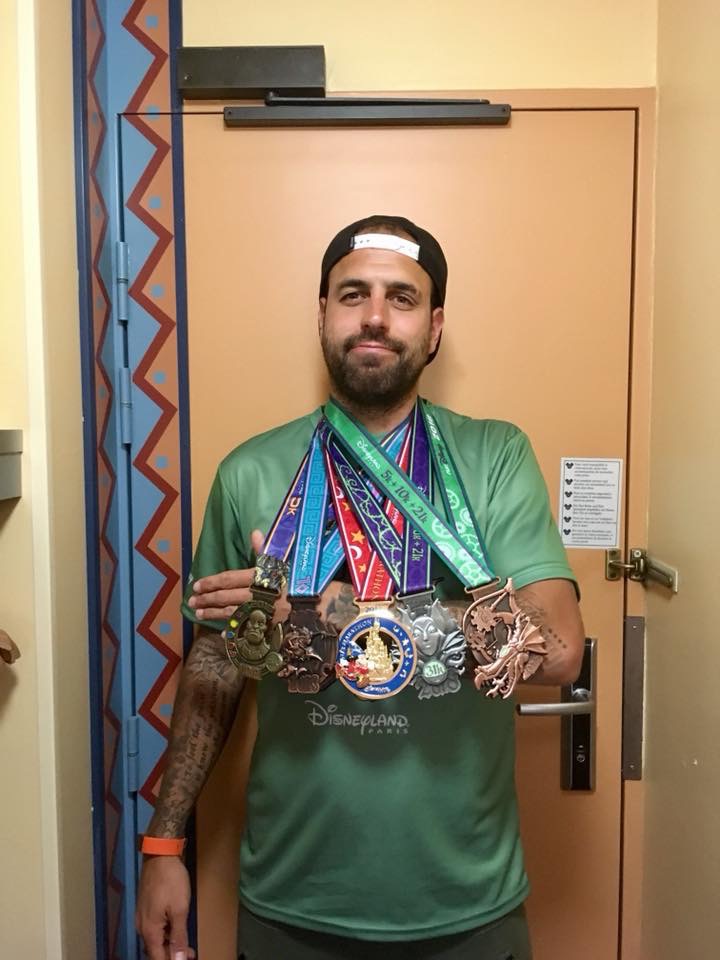